What's the first video game you ever played?

I was reading through the 'what's the oldest video game you still play thread' and got to thinking that it might be fun to see what game first pulled you into gaming.

First game I ever remember 'playing' was Uninvited on the Apple II. I was 3 years old at the time and one of my earliest memories is of the picture below (except that the screen we had was radioactive green as opposed to black and white):

It gave me nightmares for a loooong time.

Time Soldiers (SMS) and Super Mario Bros (NES) were probably the games that really ignited my love for video games.

Also, Uninvited for the NES was one of my all-time favourite games.
S

Pretty sure it was Rogue. The university of Santa Cruz had that game on a mainframe that I got to play as a kid.
S

I want to say either Pong, or Ghostbusters on the Atari 2600.
C

It was either Frogger or Jumpman.

Both played within the same 24 hour period.
E

My aunt and uncle had Pong and I played a little bit of it with my cousins.

the pong style game with the 2 controllers that hooked up to the tv was the first one I can remember. this was in the latter part of the seventies.
T

Either Space Invaders on Intellivision or a Donkey Kong arcade, don't remember which was first.
C

Probably some arcade game... or a game on an old 80286 computer with a green screen.

That was probably about 25-28 years ago.

Before we even owned a computer, I used to ride my bike to Radio Shack and play some side scroller game with a gay joystick on the Tandy computer they had on display. All I remember about it was the graphics were pretty horrible, and you had to jump over things that looked like spinning fireballs.

The first gaming system I owned was an Atari 2600. By the time I got rid of it, I had about 100 carts for it. Sometimes I think I was stupid for getting rid of it. My mom told me I couldn't get any more game systems until I got rid of one. That was the one I used the least, so it got sold. Pretty sure I got rid of it so I could get a Nintendo 64 or maybe it was the Playstation.

I have no idea I'm sure it was in a arcade jumping from one machine to another. Yie Ar Kung Fu was one of my favorites.

Tetris on some stand alone black and white hand held.

Geeeez I don't know, I'm pretty old, by that I mean I was born right around the time videogames became a thing so my earliest memories are of videogames. Its all kinda blurry.

If I had to guess it was one of two things, that old BEEP BEEP football game. You know the handheld with the red dots or there's a pictures my cousins have up somewhere of me trying to playing Legend of Zelda. On an interesting aside I had an Atari 2600 after I had a Nintendo I couldnt tell you why. I think at heart I was a retro gamer before it was cool. I traded my Nintendo for an Atari because I'm weird and then my PS1 for a Sega Saturn. I don't regret the latter I think I still have my original Sega Saturn. Fuck that system was awesome. Once I played FFVII I literally could not find another PS1 game I actually wanted to play. where as on my Sega Saturn I had lots of games I liked.
Last edited: Jul 27, 2016

I don't know for sure, but the first ones I can remember were Galaga and Joust. My local grocery store had a couple coin-op machines near the front.
I might have touched one of those shitty Tiger handheld LCD games prior, but I have no idea.

First computer game was when I was 4 years old. It was Zaxxon on an Atari 800 loading from tape. I do remember it taking forever to load the game, if it even loaded.
R

I honestly can't remember but the first video game that made a lasting impression (well, enough to at least remember it so) was Shinobi on the arcade machines.
H

The very first video game I ever played was either Frogger or Dig Dug on the Atari 5200. My parents had a pinball machine that I played as well, probably long before I played the Atari but that doesn't really qualify as a video game. Eventually we got a Tandy (woo!) and I was able to play Alley Cat and Where in the World if Carmen Sandiego.


My Uncle had one like this but a different model with a toggle switch & I used to play it all the time when I was little. 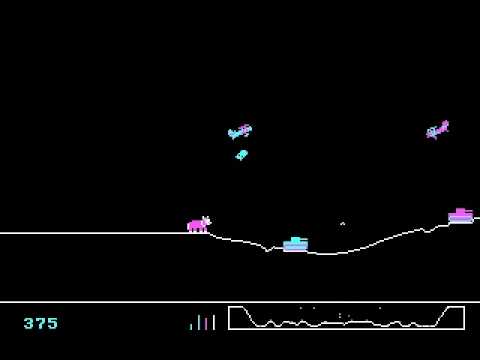 I was in 2nd grade and my dad just bought a PC that cost something like $2,500. I think a Timex watch has more processor power these days.
E

Krenum said:
Does this count?


My Uncle had one like this but a different model with a toggle switch & I used to play it all the time when I was little.
Click to expand...

No, that's a timewaster mobile game, people who play those don't count as gamers and they're destroying the PC gaming industry.

evilsofa said:
No, that's a timewaster mobile game, people who play those don't count as gamers and they're destroying the PC gaming industry.
Click to expand...

Well seeing how it came out in the late 70's, your options were pretty much limited back then for PC gaming.
R

Krenum said:
Does this count?


My Uncle had one like this but a different model with a toggle switch & I used to play it all the time when I was little.

If not, then I guess it would have to be Xevious for the Atari 2600.
Click to expand...

Holy crap, I still have a green model with the toggle switch for difficulty 1 and 2 lol. Still at my parents house, I should collect it some time. Wasnt mine but a I took it on from my older brothers.

Oldest computer games are hard since I wont remember a lot of them but I think Pharohs Tomb or whatever it was called plus one that had gorillas on buildings that threw explosive bannana's that blew up the map (like a predecessor to Scorched earth) but you could only put in the angle of the throw and power.

Otherwise Pong, some Atari stuff and the Odyssey 2 collection as we had that one.

It shows my age. I'm almost 41 years old, so when I was a kid it was Atari or nothing really. I remember being fascinated by Combat and all it's game variations at the time.... Tanks, invisible tanks, and PLANES too? Sweet jesus!

I honestly would like to go back in time and show my 6 year old self what 'video games' would be like in 30 years. My little mind would have been so blown....

the first video game you ever played
Click to expand...

what game first pulled you into gaming
Click to expand...

Either way for me it was probably super mario bros. for NES, I may've been 3 at the time

or maybe the first game I played was actually some arcade game at the age or 1, don't remember...
S

pitfall was my favorite game on 2600, and River Raid
U

Hard to say. That was a long time ago.

Duck Hunt and Super Mario Brothers back when Nintendo sold both the gun zapper and that robot with the NES. This was in 1986.

Fruity Fred on Amstrad, the one with the double tape deck! It had a colour screen though so must've been pretty epic for the time.
You must log in or register to reply here.
Share:
Reddit Pinterest Tumblr WhatsApp Email Share Link
Top