usually that's just the port designation, sata0 is the first port. now if your board has a secondary controller chip there could be a bit of a difference but usually youd only see it during large file transfers.
M

There is no such thing as SATA0. You can read here about the specific revisions of the Serial ATA specification.
X

Good thing I use a nym on this board.

Good thing I use a nym on this board.
Click to expand...

its half the raid0 rate. raid1 just mirrors data to both drives
M

Good thing I use a nym on this board.
Click to expand...

Reading from the drives should be comparable (but often equals single disk for RAID 1, depending on the controler), but writing is faster on RAID 0.

Made a typo before, RAID1 write speed is not 2x but 1x.

Yep. RAID 0 theoretically multiplies drive speed. You can get more than 2 disks involved as well, if you like - you can technically stripe (RAID 0) as many disks as you like and the performance scales linearly, so 4x drives in RAID0 is theoretically 4x the speed of a single disk. Obviously, this is all up to your actual controller to be able to handle such throughput, and the RAID controllers that motherboards have 'onboard' is generally pretty shitty, so I wouldn't count on that great of scaling. The downside of course being that the loss of any single drive is the loss of the entire data array, hence why folks don't normally go beyond 2 disks with RAID0 because your failure chances scale just as high as your performance.

RAID 1, on a smart RAID controller (not an onboard unit) can read data from either drive providing some read benefit (though nowhere near RAID0), while all drive writes are mirrored across all drives and thus operate at 1x speed. RAID1 functionally serves no purpose except redundancy, and its performance characteristics are normally not discussed because it's assumed to be identical to a single drive.

For funsies, there are other RAID modes. RAID 10 is a 4-drive minimum combination of the two; it's a striped (RAID0) set of mirrored (RAID1) drives. It has half the performance boost of RAID0, at the same (or better) level of redundancy as RAID1, assuming you want to use a minimum of 4 drives and sacrifice 50% of the total array capacity. RAID 10 can be the fastest type of RAID array around that also includes some level of data redundancy.

RAID 5 is a parity raid set. It requires a minimum of three drives, and you lose 1 drive's worth of capacity to redundancy. You have the potential for amplified read and write speeds because it's using all disks simultaneously, but this is highly dependent on the RAID controller because there's a lot of math involved in RAID 5 (calculating parity) that doesn't exist in RAID 0 or 1. Assuming you have a powerful hardware RAID controller, RAID 5 can be blazing fast.

RAID 6 is like RAID 5, except you need four drives and you lose 2 of them to redundancy. Like RAID 5 you have the potential for amp'd up speeds, but it requires a doubly fast controller even compared to RAID 5 because you have to perform parity calculations twice on each write, versus just once for each write on RAID 5. It's significantly harder on the controller and thus write speeds especially can suffer, unless your controller is awesome. I have 12 drives in a RAID 6 array myself.

Then there's funky ones, like RAID 50, which is a stripe (RAID0) set of RAID 5 arrays. This is a minimum 6 disk operation, and protects you from minimum 1 maximum 2 disk failures. On the upside, performance is nice with two RAID 5s striped together.

There are exceptions to the rule that raid 0 multiplies drive speeds in all conditions. For example, I used to have three 80GB SSD drives in raid 0. Back then there were no large SSDs and they were all kind of slow (compared to modern drives, they were still fast compared to mechanical ones) so I figured, why not stripe 3? Here is a screenshot from AS-SSD

You can see that the read speed did triple, but the write speed was basically unchanged. 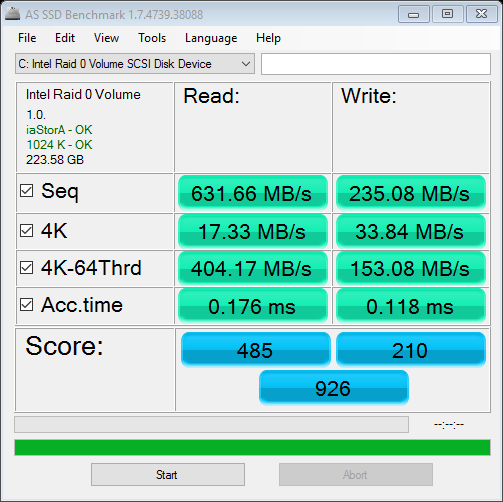