Could it be Insomniac Games? I think they would be considered a large studio, though.

Ready at Dawn was tossed out by others online, mentioning that the developer recently opened up a studio in Portland despite having financial issues. Would be closer to Redmond, but still 200 miles away from Microsoft HQ. 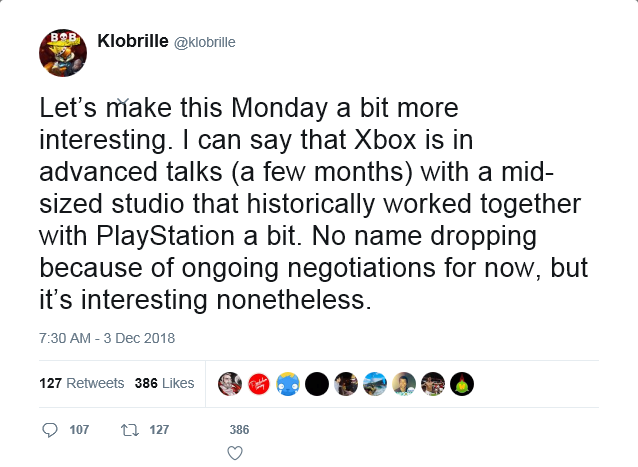 Naughty Dog. Uncharted 5 would probably blow no matter what console it's on.

viivo said:
Naughty Dog. Uncharted 5 would probably blow no matter what console it's on.
Click to expand...

Naughty Dog is a subsidiary of Sony Interactive Entertainment, so they're out of the question.

I wish it was Naughty Dog. The vast majority of MS exclusives show up on the PC as well.
Insomniac would make sense. It would explain the weird sudden PC release of Sunset Overdrive.
V

Historically MS is knownnto buy studios only to shit them down after said studio doesn't meet their expectations.
C

Insomniac's next game is for Oculus Rift if that means anything.

Kinsaras said:
Insomniac's next game is for Oculus Rift if that means anything.

Some cool stuff going on there too bad it's VR
J

Kinsaras said:
Insomniac's next game is for Oculus Rift if that means anything.
Click to expand...

I could see Insomniac....the rumors keep persisting that Sunset Overdrive is coming to PC. I do enjoy the Ratchet and Clank games though, so hopefully those would continue (even though they always been PS exclusive).
D

JavaLava said:
I could see Insomniac....the rumors keep persisting that Sunset Overdrive is coming to PC..
Click to expand...

Fam, its been out for weeks.
J

Insomniac is definitely a large developer. A studio the size of Ready at Dawn would be more akin to mid-size. I've seen a couple people toss out the possibility of it being someone like BluePoint, which would be interesting. Bluepoint mostly does remasters, but they are amazing at it. MS could pick them up and have them work as a co-developer for a lot of their other studios or use them to remaster some older titles. Housemarque and Quantic Dream are also options to consider. I'd hope MS wouldn't pick up QD as their games tend to be kind of trash, but Housemarque would be something to take notice of.

That said, I'd kind of love it to be Ready at Dawn. They've proven they're a great studio, but I feel their best place is in the AA arena where they don't have to worry about bloated AAA budgets. MS seems more interested in that area than Sony these days, unless its VR titles.
E

My money is on either Quantic Dream or Supermassive Games.
D