Oldest case still in use

As a computer parts hoarder, I was interested in seeing who still has really old cases still in use. There are plenty of retro/vintage builders so I am sure there is some old stuff out there.

I built some PCs for a couple of friends back in 1999/2000. After they upgraded, I took the cases back. Supermicro SC-760 cases. One got painted blue, the other is still beige. Both are still (sparingly) in use. One houses an x79 ESXi system and the other a Threadripper 1920 Linux collection of parts.

There must be some old Antec/Ultra/Chieftec builds going strong! What old crap are you still using?
A

I have a whole thread on an old case...

I have a bunch of Antec/Cheiftec cases myself. Ive shown a couple in the retro computing thread, along with a bunch of old Baby AT cases with mostly socket 7 systems in them. One I havent shown is an Antec SX1240 full tower with an Asus A7M266-D duallie system in it. Used it as my server for a long time, but it eventually got retired and now it only gets turned on infrequently.
D

I recently stopped using a Cosmos 1000 that I have had forever. Considering putting it back in use.

I rarely throw cases away. ATX is so long lived I can always find a use for an old one, even if I have to leave the side panel off for airflow.

I still have my Pentium II in the original HP case from 1998 and a Supermicro 750 chassis serves as the mega-overkill case for my pfsense server. Not to mention I have a bunch of rackmount and workstation chassis from '98-03 that I'll recycle someday (proprietary MB/PSU form factors).

I have two retro/vintage systems. My oldest uses two 32-bit Gallatin-core Xeons (basically two Pentium-4 Extreme-Editions in Xeon form) with an AGP Radeon X850XT-PE in a Chieftec Dragon case that I painted Chevy-Engine-Orange. My slightly more modern retro system uses an overclocked 2500k with two Radeon 6870 cards in Crossfire, using an Antec Super-Lanboy case. Both cases are still covered in random stickers from my LAN Party days. Those are the two oldest cases that are still being "used".

I think even my main case, which is a big old Corsair 800D from ~2009, is almost old enough to be considered a retro case at this point. Thankfully it's still big enough to support even the longest of the upcoming 4090 cards, along with my 360mm radiator.
F

I have 2 Enlight en7250, holes for fans drilled in them side door off.
Years ago didn't we have a ghetto comp show?
A

This is my wife`s pc it is housed in this circa ~2007 Gigabyte Triton 180 case, that I bought at the compusa going out of business sale. It is a really nice looking case, it has 120MM fans I really like this case. 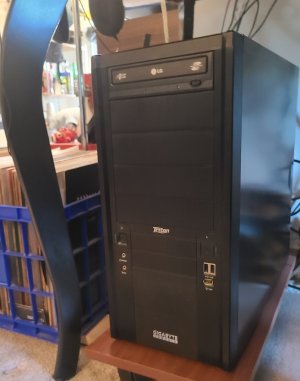