Palmer Luckey has released a new blog post entitled "I can’t use Rift S, and neither can you." where he discusses Facebook's decision to save money in the design of the Oculus Rift S by getting rid of the interpupillary adjustment feature. IPD (interpupillary distance, the distance between your eyes) is different for everyone and Palmer Luckey made sure that the Rift CV1 had mechanical adjustments built-in to suit a wide range of users. With the decision to leave this important feature out, the new Rift S has its lenses set at a nonadjustable 64mm apart. This setting is perfect for the average person, but unusable for everyone else.

Palmer Luckey makes many sensible suggestions in his column that would fix the issue. He suggests selling more than one SKU of Oculus Rift S. Create one SKU for narrow IPD consumers and a second for wide IPD users. "This is a common principle behind almost all wearable goods, from shoes to clothes to watches to sunglasses -- it is the reason your wardrobe is not dominated by one-size-fits-all unisex jumpsuits." Follow the design cues from the Playstation VR which uses "solid and heavy lenses with a fairly long focal length to create an wide enough eyebox for most users." Add the mechanical adjustments back into the design. Or cynically throw more marketing dollars at it and tell everyone "Everything is Fine!" 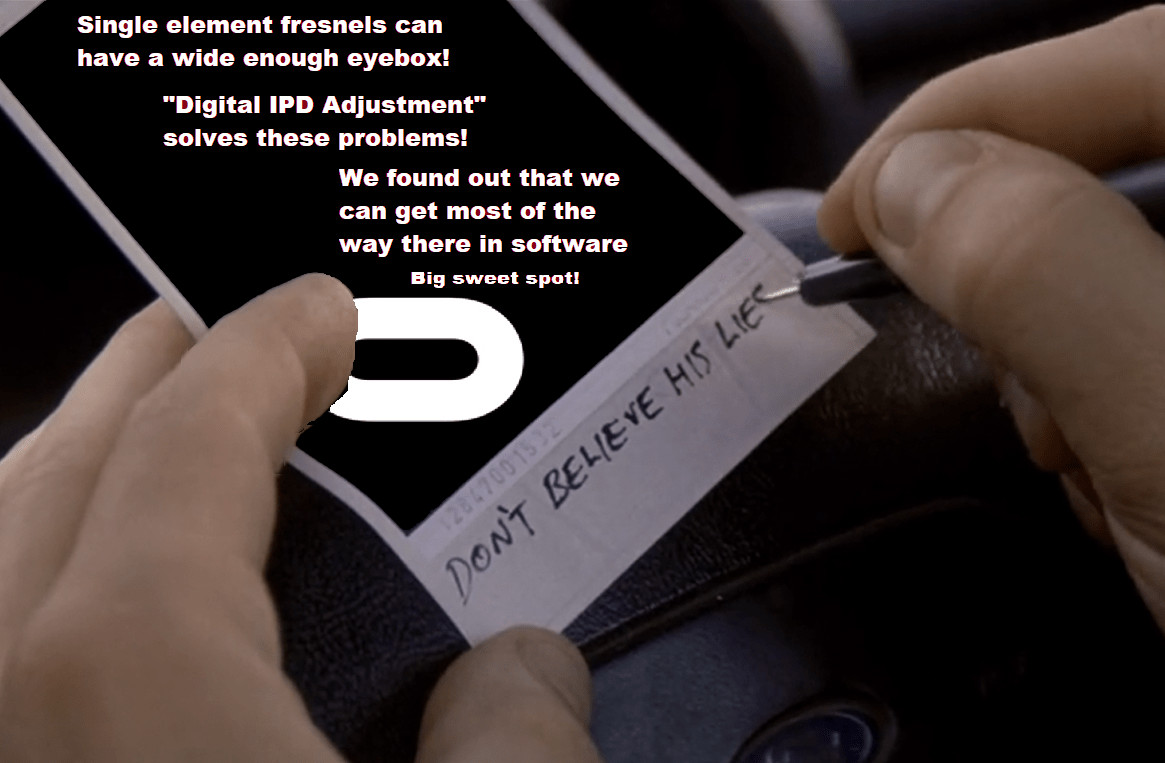 This is not the case with Rift S. Like Oculus Go, it uses two lenses that are set about 64mm apart, perfect for a perfectly average person. Everyone who fits Cinderella’s shoe will get a perfect experience, anyone close will deal with minor eyestrain problems that impact their perception of VR at a mostly subconscious level. Everyone else is screwed, including me. Imagery is hard to fuse, details are blurry, distortion is wrong, mismatched pupil swim screws up VOR, and everything is at the wrong scale. “Software IPD adjustment” can solve that last bit, but not much else – it adjusts a single variable that happens to be related to IPD, but is not comparable in any way to an actual IPD adjustment mechanism . This is the main reason I cannot use my Oculus Go, even after heavy modification on other fronts.

Although in fairness, once FB bought Oculus I shelved any ideas about buying the kit
M

This is god damn bullshit. I was seriously considering Rift S because my Rift is quite popular in family gatherings and parties, it gets used by different people, including kids. Rift S would have made setting up much easier and faster thanks to the lack of external sensors but a lack of IPD with wide range is a deal breaker for me.
T

The more i read about the 'S' version the less interested i am about it , barely even a side grade
basically the only reason they made it was because its cheaper and manufacturer and probably the slightly larger resolution is a minor cost compared to what they save from the changed from CV1

So...how does one determine their IPD before buying this thing?

/dev/null said:
So...how does one determine their IPD before buying this thing?
Click to expand...

Get a ruler, then go to a mirror, then squint quite a lot, maybe close one eye, then the other

then go to an optometrist and get it measured

The average person fits well within the design.