I've been looking for a new laptop for months. Work is going to reimburse me for it but I still have to be mindful of the company budget. We're for all intents and purposes a Lenovo shop, but it's not a written rule or anything.

I have to keep my eye off the 'gaming' laptops. It would be... frowned upon - even though they could very well do all the work I need on them.

Some people have complained that bots/scripts comb the store for the insane deals and snatch them up, giving us ordinary people no chance.

Well my fellow [H]ard [M]obile people, good news. Yesterday there were a pair of P71 laptops with the P3000 quadro, with either 16GB RAM/512 M.2 or 32GB/1TB M.2 - both of which listing as out of stock. Damn! But lo and behold when I refresh the page 5 min later, the 32GB/1TB machine is listing as in stock! Click the link! Add to cart? No, not in stock! Refresh the main page again? In stock! This goes on for about another 3 minutes. Which is it, Lenovo? Do you have this damn laptop or not?!

They did. I got it in the cart and couldn't believe my luck. Done and paid for - should be here in about a week.

Be persistent! it CAN pay off. 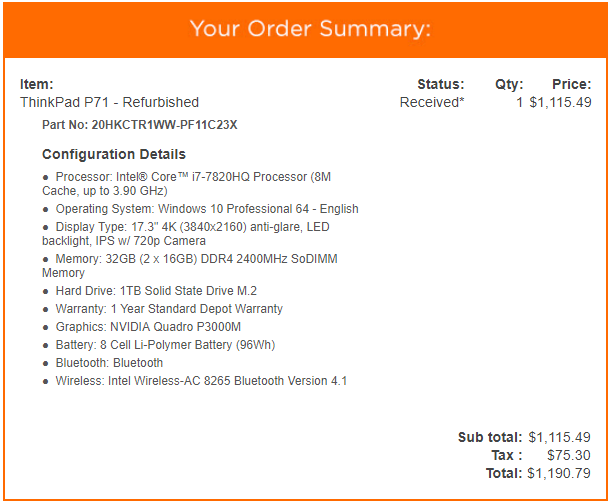 Good haul! I'm happy with my P50 except for the wonky USB ports that 3-4 motherboard replacements couldn't fix.
D

Damn I want one
M

I think the P71 is the one that supports 4 sticks of RAM and nvme raid giving you some interesting upgrade options. I've been hoping for an announcement on the next one that takes the hex core chips.
C

I really was considering waiting for the hex core P52. But this was just too good to pass up. The P72 hasn't even come up as a discussion yet.
C

Oh, and I priced out this exact same machine on Lenovo's retail site. $3050.
C

Still waiting on a shipping number.

I guess it's worth mentioning how exciting this is given that I only had a $1300 total budget. With this good of a price, I'm even able to get a 2nd charger. One for home/travel and one for the office.
C 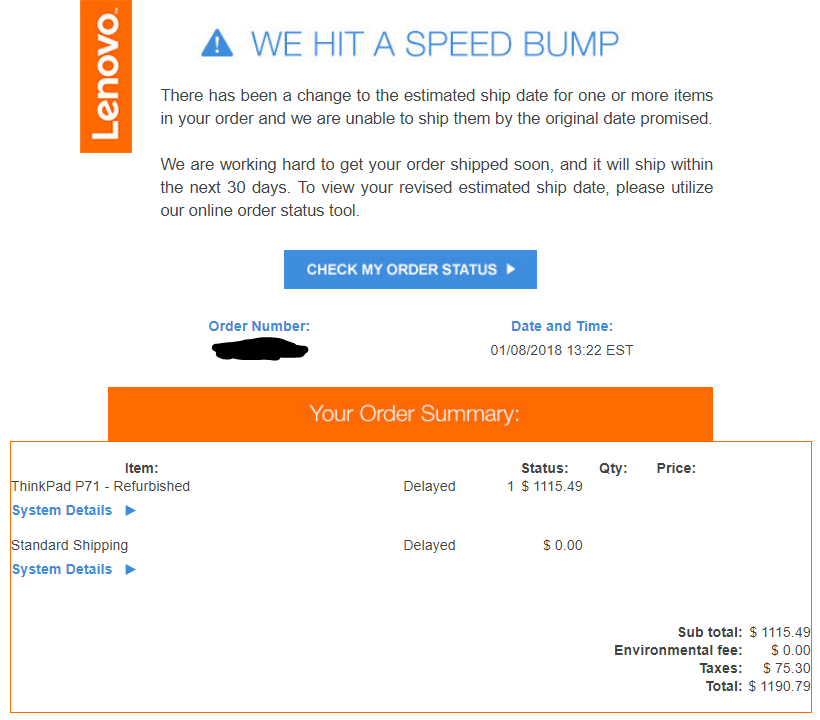 According to google, it's a common experience. Already poked a worthless rep about it - they're going to look in and within 24-48 hours should be able to give me more information and an email when it does finally ship.

I just don't get it. The item was listed as 'IN STOCK'. What's the hold up?
S

standard product overselling because they're to lazy to implement an automated stock inventory system.
T

sirmonkey1985 said:
standard product overselling because they're to lazy to implement an automated stock inventory system.
Click to expand...

It's just crappy code. If you go to buy a laptop it will show in stock, click on the listed item. Then in details you put it in the cart. It saves the said item for 15 minutes.

Open another browser it will show available, but when you go to details to add said item, details will show an out of stock.


I have seen the Lenovo timer get reset and then the item show in stock. 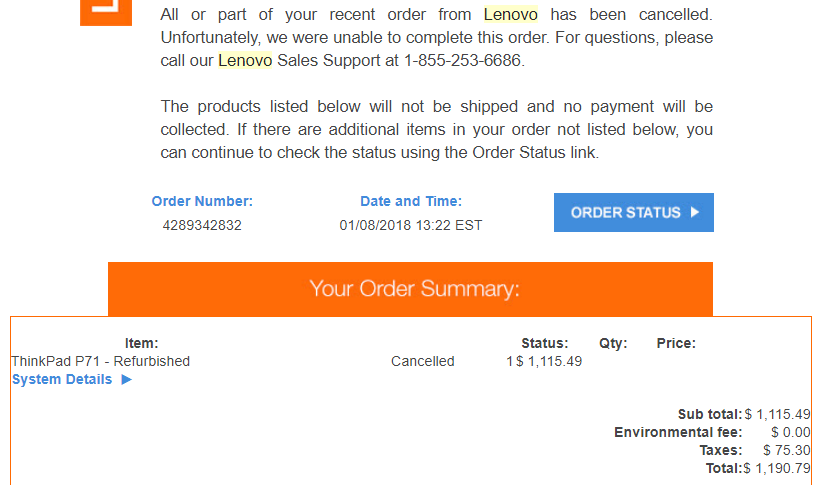 When I called, the techs, multiple times, told me that the order was cancelled due to an 'account discrepancy' or in non BS speak 'you didn't fill out the forms right'. They were wrong.

I was mad. MAD to be told that this purchase fell through because of something bad that I did. I did not make any mistakes. They couldn't un-cancel the order after confirming that the information was correct, because the item was by now, out of stock. MAAAAAAD.

I wanted to speak to a supervisor... "They'll tell you the same thing I have. There's nothing that can be done." To which I respond, "Then I'll talk to their supervisor. Unless you're the CEO, everyone's got a boss."

This truly ends up going no where. They fail to even escalate me one level.

I call my buddy. My buddy who works for Lenovo, formerly IBM- he's been there for something like 15 years now. He hears my plight and sees what he can do. What he can do, turns out, is a lot. I'm now being handed off to a director of the consumer division, 2 steps UNDER the VP. I get handed to a customer care ambassador.

She explains that the techs gave me the wrong information - there was no discrepancy with my account. The order was cancelled because they over-sold the item and their web site is terrible. Sadly though, after several back and forths the best they can do is a 15% coupon applied to my next order.

But wait. Did you know about 'perks' pricing? Look it up. You can get a flat discount between 25-33% off anything in the retail store. Hey, not bad. Especially since I'm able to take another 15% off that.

But wait again. There's even more. Turns out my buddy is willing and able to give me 'friends and family' pricing (Sorry, no. Don't even PM me asking. He's out of a limb and I'm not going to abuse his generosity). This turns out to be 40% off... and then another 15% off that. Not bad. Now I'm actually happy. I'll end up getting something that's a little more than my $1300 company budget, and a good bit more expensive than the amazing $1200 price from the outlet, but it'll be new, not refurbished, and 8th gen, not 7th gen.

So I'll end up with either a P52 or a soon-to-be-released P72 as configured: 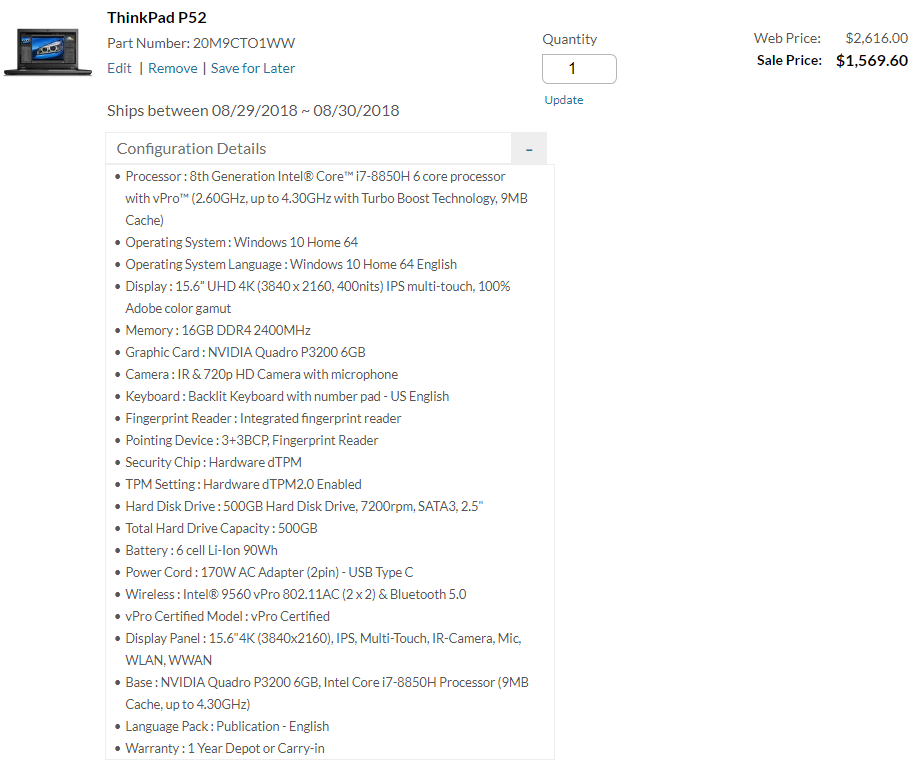 Also, you read it right. Insane specs, but with a 500GB spinner. I have a Samsung 480GB SSD laying around that I'm going to throw into it.

It's been a long road, a headache, and I would rather have had the original P71 at the original price. But since that's not going to happen, this is good enough.

I'll update again once I make the P72/P52 decision and get the order in and discount applied. If they try to tell me that they won't stack the promised discount on top of the employee pricing, I'm going to be so mad I don't know what I'll do. They honestly have spend enough person-hours on this to have simply given me a laptop to shut me up.
S

Not bad at all.

Not bad, but I'm not a huge fan of Lenovo.

Nice, seems like a pretty good machine then. Those business class/workstation laptops are no joke.
C

/dev/null said:
Not bad, but I'm not a huge fan of Lenovo.

Yeah, we are an exclusive Lenovo shop. Not because of some contract, we just have had good experiences with the company and keep things consistent.

I thought laptops had full 1060s? Is it just downclocked and lower TDP? Are we talking about the MaxQ or is that another thing? Not really caught up with mobile GPUs.
C

mnewxcv said:
I thought laptops had full 1060s? Is it just downclocked and lower TDP? Are we talking about the MaxQ or is that another thing? Not really caught up with mobile GPUs.
Click to expand...

You may be more right than I. 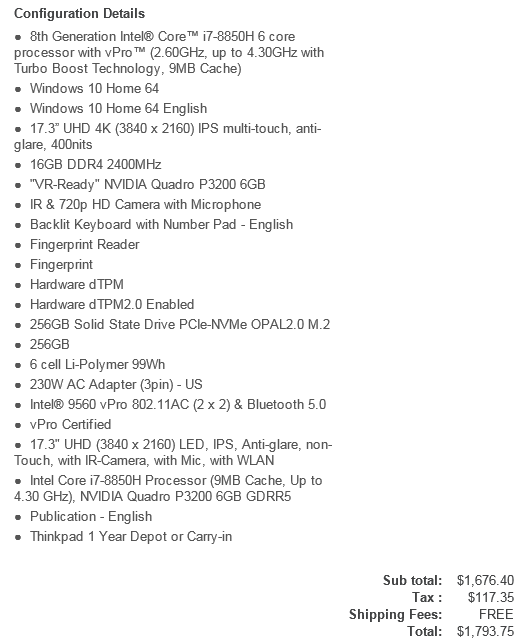 Once it ships they'll apply a 15% credit to the charge. And because we're a not for profit, we get the sales tax back.
C

And all I've done so far is putz around the desktop and play some 4K youtube. Gaming tonight, hopefully.
S

I may need to peruse that more often. I use a loaded P70 at work and I lubz it (tho the battery is totally dead and it lives in the dock now). Tried getting a P70 off eBay but it turned out to be a dud, just sorta looking once in a while.
You must log in or register to reply here.
Share:
Reddit Pinterest Tumblr WhatsApp Email Share Link
Top