However, because I pretty much never go backwards when it comes to system upgrades, there's a damn good chance that my future DDR5 system is gonna be using 128GB just because. Ask again in 2 years.

I stalled out at 64GB. Can't go backwards to save a couple hundred bucks, but I haven't needed more. I was mucking around with some programming stuff on a 32GB machine back in early 2014 and ran out of ram, so I grabbed a second 4x8GB kit for my X79 machine. I'm still at 64GB. There's a good chance I might go backwards on vram next time I upgrade my vid card though. I bought a 3090 last December since I was able to get it into my cart and check out. I'm usually more of an xx80 vid card buyer, so I could easily see my next vid card having 16GB. That said, 2021 made me glad I splurged.

Went up a lot in memory this year. First the shitbox got upgraded from 12GB -> 16GB, then I got a laptop with 32GB, now I'm putting the finishing touches on a new Ryzen build with 64GB. I thought about 128 for even bigger RAMdisks but that's a lot of $$$ for memory.

I have 2 kits, i couldn't swallow the price of getting my original kit in 64GB, so I have:

I set it to use the Kingston timings, haven't tried tweeking it at all yet​

I take the max sane memory for a platform, cut it in half and put that in (since that's generally the level where it takes some tweaking to get happy, but is still possible to get high performance out of). So for Threadripper, it's 128G, for Ryzen/Intel consumer, it's 64G. The one exception to that rule is my TR1 system, because it was so finicky on ram - it only has 64G, because that's all it'll take and do ANY memory overclocking.

Gaming system has 32G, but that's because it's just a gaming box. Does nothing else. And it'll get upgraded to 64G probably next spring.

NAS because I was playing with dedup at the time.
VM boxes because... Well, VM boxes. It's the max the mobos will take.
Gaming box because it's the smallest amount I could buy the system with. Never seen a game push it over about 10GB, so most of it's wasted.
Laptop because that's what work wanted to give me.
Old desktop/remote access jumpserver because I had leftovers after upgrading all my VM servers.

You failed the challenge
L

Nenu said:
You failed the challenge
Click to expand...

Check the thread title and what you wrote.
L

After a month. Finally got it dialed in.

lukeintheo said:
After a month. Finally got it dialed in.
Click to expand...

Battlefield: 2042 could be the first mainstream game where 32 GB may help out certain systems. 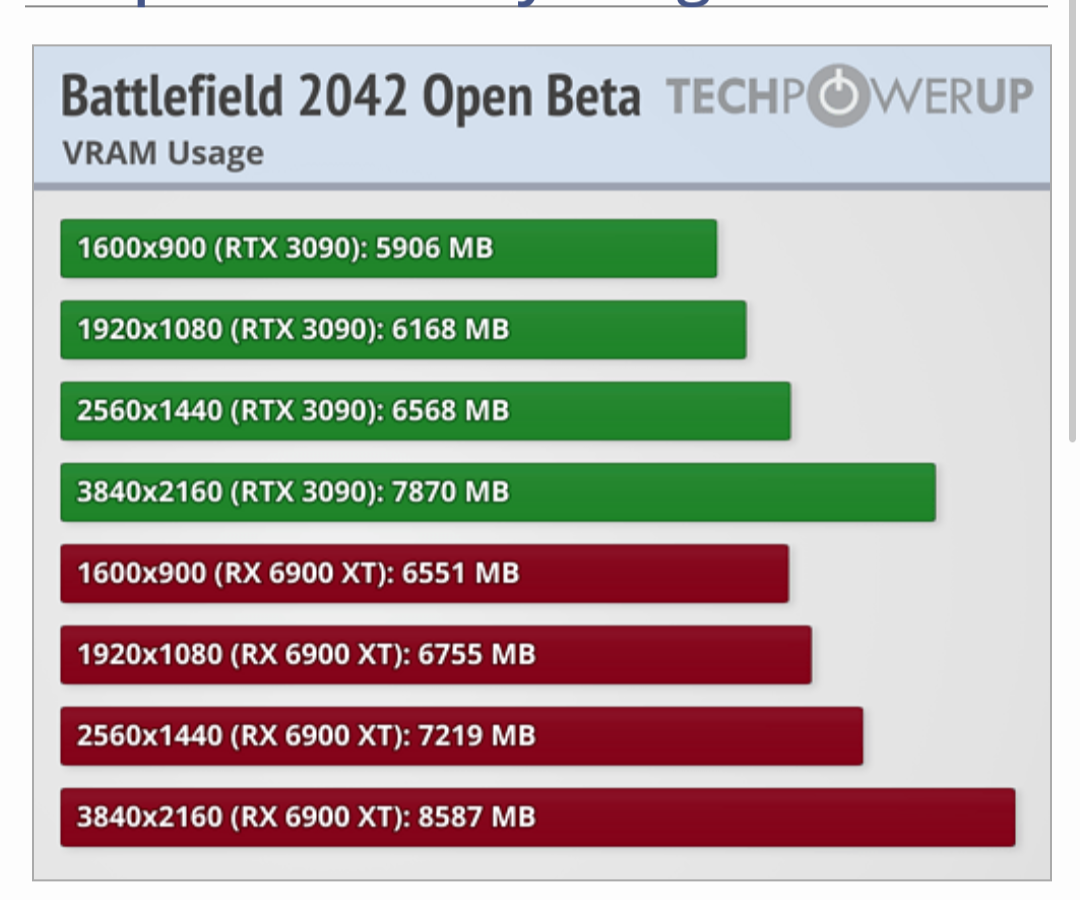 Things are particularly rough for AMD and this chart accurately reflects what is required not just allocated.
From Tom's:
"I'm not sure why AMD's GPUs often seem to need more memory for equivalent settings than Nvidia's GPUs, but it's probably internal delta color compression among other things. In Battlefield 2042, at least with the game ready AMD 21.11.2 and Nvidia 496.76 drivers we used for testing, it seems like AMD's 8GB cards behave like Nvidia's 6GB cards, and its 12GB cards more or less match the behavior of Nvidia's 8GB cards. There's probably more room for driver optimizations, in other words. That or AMD's Infinity Cache is playing a big role."

I thought this game was just a vram hog and was the end of it, but results were very different at Techspot.
https://www.techspot.com/article/2364-battlefield-2042-benchmarks/

Big difference here as even the 6 GB AMD cards were holding up at 4k. So there are of course no two tests the same, but what stood out between Techspot vs Tom's and TPU is that Techspot used 32 GB of ram whereas the others used 16 GB (to the best I could find info on).

Techspot did a test a few years ago where the 4 GB RX 570 was taking a hit going from 16 GB to 8 GB of system ram when the higher vram Rx580 didn't seem to mind.

So anyone able to test this? It does seem that the game uses an large mount of system Ram and possibly even more if it has to "make up" a lack of vram.

When I was shopping for my new build I was playing RDR2 on my old machine and I was riding to town. My computer crashed right before I unloaded 20+ skins. I went to event viewer and I had ran out of ram.
This was my fault, because I had limited my virtual RAM (remember when 16gb was over kill? ya I had this machine that long).
edit. For 30 extra bucks I got 32 over 16 with 2 empty slots for 64 if I ever want to go there, kind of a no brainer. I had seen memory usage over 16 a few times.
You must log in or register to reply here.
Share:
Reddit Pinterest Tumblr WhatsApp Email Share Link
Top