Since I just swapped over to a new Ryzen 5800x build, I went with 4x8 Corsair Vengeance Pro at 3600. Running them at the normal XMP settings with no issues.

built insane system with 128gb of 4x32gb its working great im still looking for ways other then ramdisks to utilize all the memory.

haha well im sure they could easily fill 128gb of ram. was told this was worst idea for ryzen as it was 2 dimms not 4. i managed toget this kit to cl 14 cl 3600mhz, i dont see any issues,
E

Any modern web browser should do.

It's become an important point now looking at laptops to buy. 16gb should be enough but what if I somehow start doing the more demanding tasks? Laptops OEMs love to solder things on so you're stuck.
S

I stuffed 32GB even in my laptop. Ram is the one thing that will keep older stuff running well.

SamirD said:
Do servers count? I've got 288GB in one of them.
Click to expand...

Player hater, lol. 32GB in the laptop in 16GB in most of my desktops except that one with 256GB in it--I forgot about that one.

yeah havea nice old AMD Opteron duel socket 32 core system 256gb its my F@H rig got 4 Titan Blacks running on her lol and use it for compiling stuff since i setup at 128gb ram drive. (DDR 3 ECC)
S

Shadowarez said:
yeah havea nice old AMD Opteron duel socket 32 core system 256gb its my F@H rig got 4 Titan Blacks running on her lol and use it for compiling stuff since i setup at 128gb ram drive. (DDR 3 ECC)
Click to expand...

Nice! Those compiles have to be pretty quick even by modern standards.

yeah the ram really helps remove the bottleneck. cpus could be better but if you got software that can utilize duel socket cpus it helps alot.
Last edited: Jun 5, 2021

Still 32GB in my laptop, Wishing I could up it to 64GB but the machine is incapable. Between VMs, multiple build projects and multiple browsers with untold tabs open I'm running deep in swap these days. 4GB is a light day, Have seen it upwards of 30GB of swap partition use. nEeD mOrE POWAH. 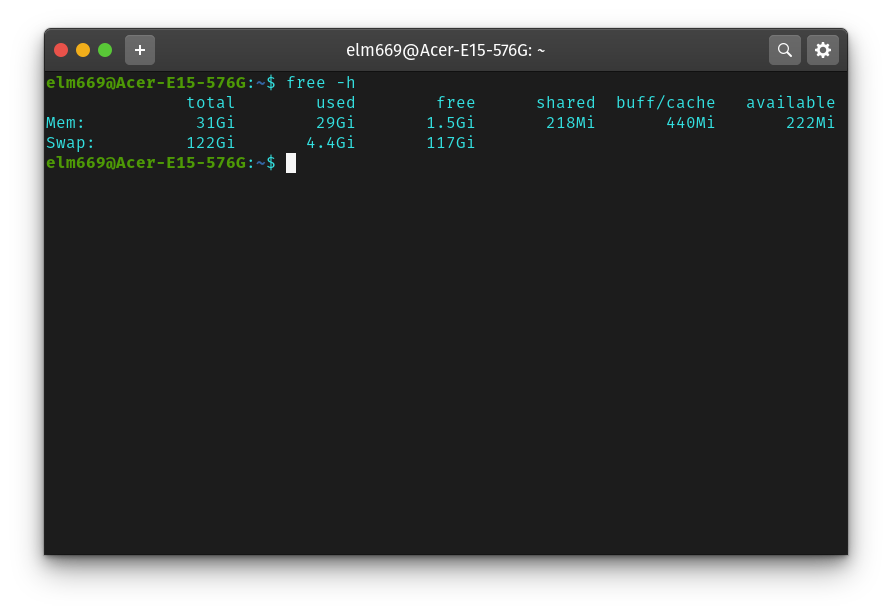 Found another use for me boosting my already stupid fast SSDs to new heights.

32GB for me. It just made sense when I was building my system earlier this year. Most of the time 16GB is sufficient, it is nice to have a bit extra when running VMs etc. from time to time. Also worry a bit less about what I have running in the background when gaming.

16GB, not one game I have played has needed near that.
And much higher speeds are easily attainable on 2x8GB vs 2x16GB or 4x8GB, for much less dosh.
I like being able to tweak something on my system, CPU and GFX card speeds gain jack these days.
All thats left is ram speed so I got my 3000c15 boosted to 3866c17, regained some sanity

this amount of ram works wonders i created a ramdisk in primo ramdisk for UE5 holy hell i can render in realtime. loving this rig more and more.
W

Originally built my current TR 2950x rig with 32 GB (figured I probably didn't need more, save a little $$), but VMs & work-related memory pigs like Visual Studio/SQL Server/Chrome (lol) have been eating most of that up regularly for some time.

Finally got tired of bumping into my memory limits and upgraded to 128 GB. Bit of overkill at the moment but given how long I keep computers nowadays I didn't want to regret not going big later on.

Pardon my ignorance, how do you guys create a ramdisk?

I use Primo Ramdisk or there is freeware you can use. 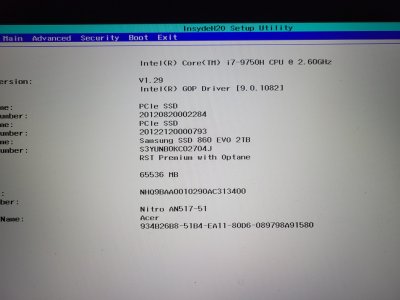 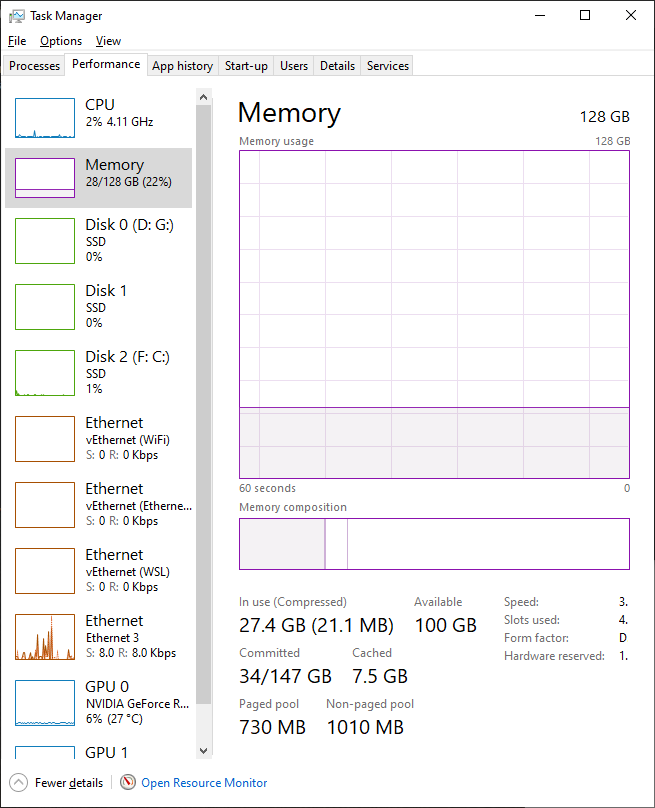 What are you using this for? Video rendering?
L

Violator said:
What are you using this for? Video rendering?
Click to expand...

General purpose. I collapsed all my machines into one. So I can do computer vision, games, development, ML and my office machine… all at the same time if I want. Generally all just runs as a vm on Linux but I can boot to windows if I want.

keep meaning to play around with https://www.notebookcheck.net/Hack-...nality-on-consumer-NVIDIA-cards.531761.0.html

Get myself 3*8 core, 32gb ram machines with an 8gb gpu running all at once, just for a giggle.
D

I think the better question to ask oneself during speccing out would be what are your daily memory hogs.

In my case the usual (daily) offenders are VMware, worldcommunitygrid, RAWTherapee (I take photos in RAW) and Firefox.

Now, the thing with operating systems is they'll adapt to the amount you have and will use less for caching and buffers, but you'll get to pay for that in wasted IO time.
I'm at 58% usage right now, and it's important to me that there's still around 10-15 gigs easily in case I need to quickly edit a photo, video or spin up a VM for something.
16 is enough for me, but seeing as I was paying close to a thousand for everything, I simply preferred to get the other 2x8 for around $130 so I won't get mad at myself down the line.

32GB (4x8, quad channel) here. Up until this year I ran 16GB since 2018 and was still enough now, I just wanted to be prepared for memory hungry game releases in the future. Happy to have the extra buffer for now and faster memory speed.
V

Has the situation changed over the last 6 months for anyone?
J

Violator said:
Has the situation changed over the last 6 months for anyone?
Click to expand...

Yeah, I bought a 64GB G.Skill 3733 kit, and it's sitting in my X99 rig right now running at 3200. The price was really good so I couldn't pass it up, and I'll probably use half of it to build something faster eventually.
You must log in or register to reply here.
Share:
Reddit Pinterest Tumblr WhatsApp Email Share Link
Top