Games to Play with young kids

So my older son is 4 going on 5. We enjoy playing some of my old PC games together every now and then. I'm a little picky in what he is allowed to play, so anyone have suggestions?

At his age, I'm really not interested in him playing hyper violent games like FPS games. But at the same time I'd like something with a little intelligence to it.

He's played some old NES and SNES games but I find that they just require too fast a reaction time for him right now. There's a couple he likes but I think most of them will be more appealing as he gets older.

Any ideas? Kind of hard for me since I do enjoy FPS games and especially horror games. I figure games like alien isolation aren't really appropriate for a 4 year old lol

Minecraft. Endless possibilities and you can turn the difficulty right off, if it's too fast paced ... But really, you set the pace.

My kid loves Minecraft, and those Lego games were a hit with him.

I recommend staying away from Roblox. It seems very popular with kids (mine constantly asks about it) but the games have shady in-game stores (one even had the store menu assigned to a face button) and the game content seems shifty.

SeymourGore said:
My kid loves Minecraft, and those Lego games were a hit with him.

I recommend staying away from Roblox. It seems very popular with kids (mine constantly asks about it) but the games have shady in-game stores (one even had the store menu assigned to a face button) and the game content seems shifty.
Click to expand...

Tons of weird shit on Roblox, but if he's controlling when they play and what, it's great. Lots of cool little games on there like tag and hide and seek and stuff. But, as mentioned above, there is also some reeeealllll seedy stuff in Roblox.

My kid sits on my lap and I'll drive around in SnowRunner. He'll hit the horn. We also do Trials together (dirtbike type game).

Get a Switch and some Mario games, like Mario Party, Big Brain Academy, Mario Kart 8 Deluxe.

This is my nephew when he was 3 trying out Counter Strike Source,


We built him his own PC and here he is playing Two Worlds,

I can't allow my kid to play on his own. He'd get hooked and it'd be the stuff of nightmares to revoke it.
T

My brothers kids were laying Subnautica but they are around 12.
B

Thanks guys. After just about everyone saying Minecraft, I guess I should give it a look.
B

Game pass has Pixar and Disney games that are ok
C

And there's no script or storyline. No weird jokes. Just pure and goofy game play. And it's much slower paced than something like fall guys.

SnowRunner, some of the LEGO games but they have violence (you said Homeworld though and there's definitely violence in that), Train Sim World 2 if he's into trains, Railroad Tycoon, Rollercoaster Tycoon, Gizmos and Gadgets (might be tough to get running), Dr. Brain, etc.

Nerf Arena Blast, the old one from Atari. I started both my boys on it when they were 3 years old. Wife had no problem with it since it was just Nerf guns. I can't tell you how many hours of quality time we've spent together playing that game in LAN mode.
G

disneyland adventures played well on PC for kids, forgot if it had reading, i think most everything is spoken.
The classics, Super Mario world
D

Look into some racing games for him. Nascar Dirt etc.

If you have a PS3/4/5, the Little Big Planet games are great. We've played it a lot with both of our kids as they were growing up. Wife and I are still playing through Sackboy: A Big Adventure right now too and it's definitely worth playing with any kids. Otherwise, Nintendo is where it's at with the Mario games, Mario Party, Kart, Tennis, Golf, etc.
J

+1 for Nintendo. We have a Wii-U and I personally recommend the following:

My kids loved all of those games. And every single game, except for Animal Crossing, is still available on the e-shop.

If a Wii-U is out of the question and you don't have a Wii (or don't want to get one) then a Switch with:

- Kirby Star Allies
- Pokemon Let's Go (Pikachu or Eevee)
- Super Kirby Clash (this is a free-to-play, pay-to-win, but is good in short intervals. You can easily have a good time with this for like 20 mins in a day)
- Rayman Legends
K

It's a work in progress, technically free but I think has the potential to be fun, educational, and look pretty decent graphically. I won't claim to know coding, but, in the videos, he covers that as well when he's creating/updating it which could add more educational benefit (more for you) if there's any interest there.

I found it through https://www.msn.com/en-us/entertain...han-500-games-for-10/ar-AAUMDzy?ocid=msedgntp

My son is eight...his favorites are minecraft, farming simulator and he has been obsessed lately with feed and grow fish.
A

And there's no script or storyline. No weird jokes. Just pure and goofy game play. And it's much slower paced than something like fall guys.
Click to expand...

+1 for Human Fall Flat. This has been my son’s favorite game for past 6 months (he turned 6 in Dec). We play split screen coop and its all of the things chameleoneel described.

I’ve also been really picky with what my son can play and usually look for games with multiplayer / coop so I can get a feel for them. Here are some of our favorites (he likes platformers so a lot of those in this list):

You need a nice simple, easy to pick up and play game with almost zero difficulty. I recommend Dwarf Fortress or Cataclysm: Dark Days Ahead.
M

I learned typing using that exact software and I am certainly faster than the average person at typing.
G

silentsod said:
I learned typing using that exact software and I am certainly faster than the average person at typing.
Click to expand...

So, Steam has the Sonic racing games, Sonic All-stars, Sonic Team racing etc. All of them support up to four-player split-screen gaming ON PC.

Sonic Transformed is the best one, even a die-hard Mario-cart fan would love this game. Tons of fun and huge, HUGE amounts of content. I can't recommend these games enough.
D

Lovers in a Dangerous Spacetime - four player co-op space combat game. I've been playing this with my daughters for years. They loved it when they were younger, and we all still play it now that they're older too. It starts off easy enough, and gets tricky after a while. Highly recommended!

Mario games are always nice, especially the multiplayer ones.

I started my kids a little young on Borderlands co-op with me. The humor typically went above their heads and under mine, so... It's what got them into shooters though. Easy enough to pick up, plenty of loot to keep them interested. Funny characters, etc. (my youngest probably started playing these with me when she was 6-7).

You can never start a kid to early on Hollow Knight.

My kids have been playing Minecraft since they could use a computer as well.

I run a Terraria server for our house too, so we can all hop in and out at will to build things, or fight bosses. Definitely a good one.

I kind of steered them clear (mostly) of Roblox. Seem to be a lot of degenerate idiots on there for some reason. I mean, there are anywhere online, but they seemed prevalent there.
O 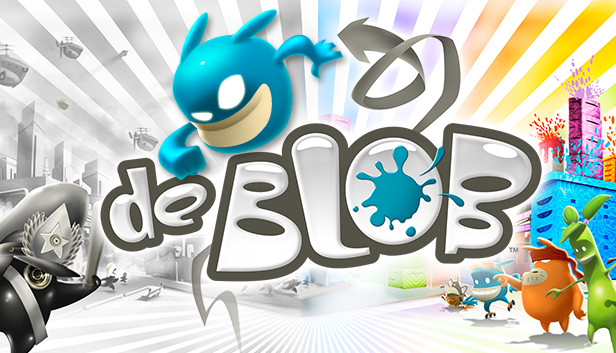 de Blob is a fun one to play, and I'd say it's pretty suitable for kids. While there are two de Blob games, I think the first one is better. You add color into each level that you play in, and the soundtrack slightly changes depending on which colors you apply in the level. The soundtrack is pretty catchy, too.
You must log in or register to reply here.
Share:
Reddit Pinterest Tumblr WhatsApp Email Share Link
Top