So I was finally able to finish my extremely long overdue water cooling loop. I'm sure no one remembers my custom case project by this point, but I basically gave up on it until I decide to get mini itx or some nonsense. So the new build is in a Lian Li Dynamic PC-O11, which was a real pain to build due to my stupidly oversized radiator.

As the pictures are going to show there were quite a few "almost" problems I had with this build I'd like to point out in case someone else wants to build in this case with similar components.

First the 360mm airplex 2 radiator is too wide for this case meaning i had to mount the fans to the case instead of the radiator body. This actually ended up looking cool as you can see the copper fins nicely. But it also required me to buy exotic m3x28mm screws that barely hang on to the case paneling.

Second the GPU literally is 1mm from hitting the radiator with the waterblock on. 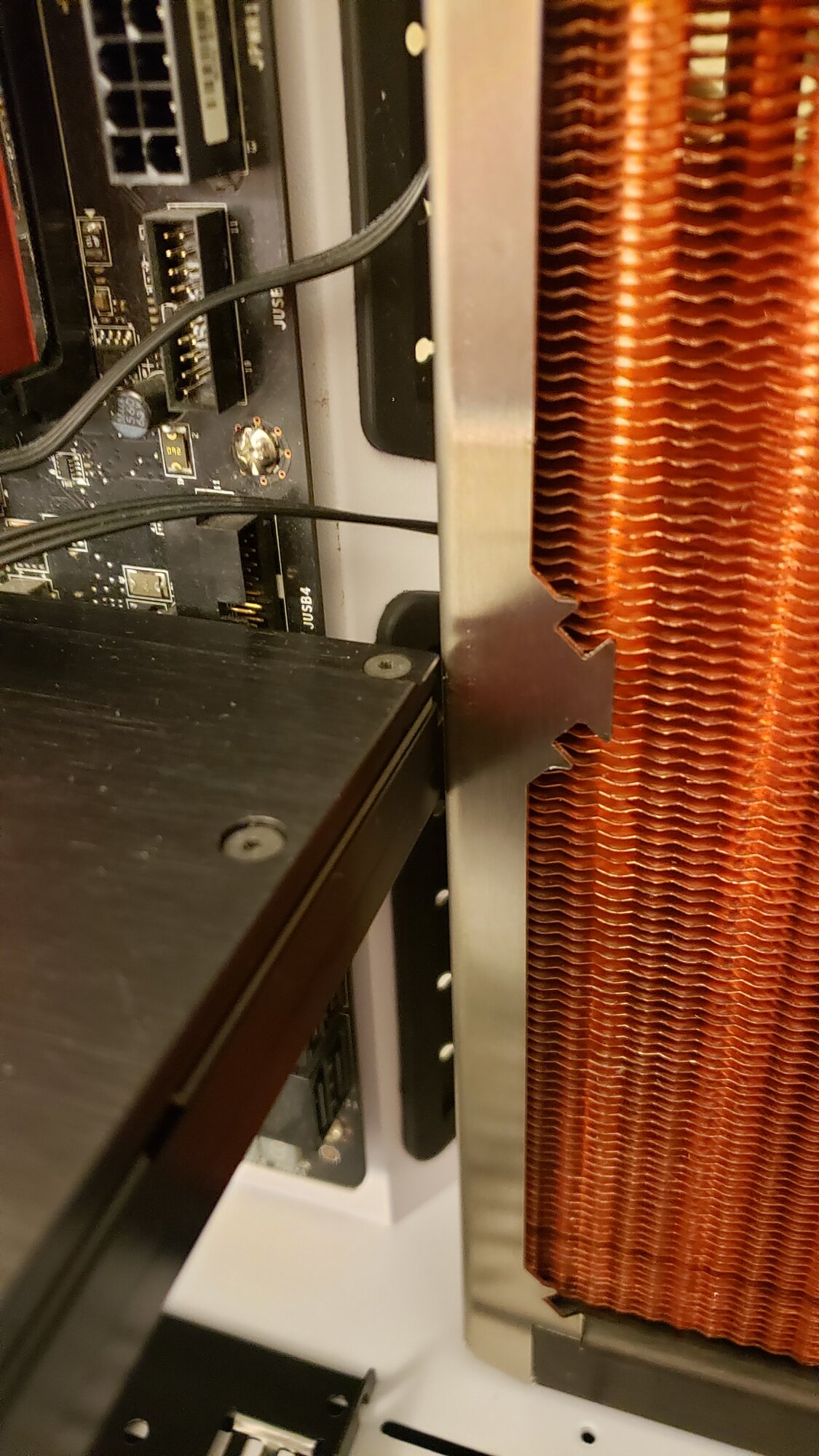 Third the SATA ports on my motherboard are parallel to the board instead of pointing out, which meant I had to use some ancient secret magic to plug in the SATA cables and was forced to use only right angle plugs that cut off half the ports. 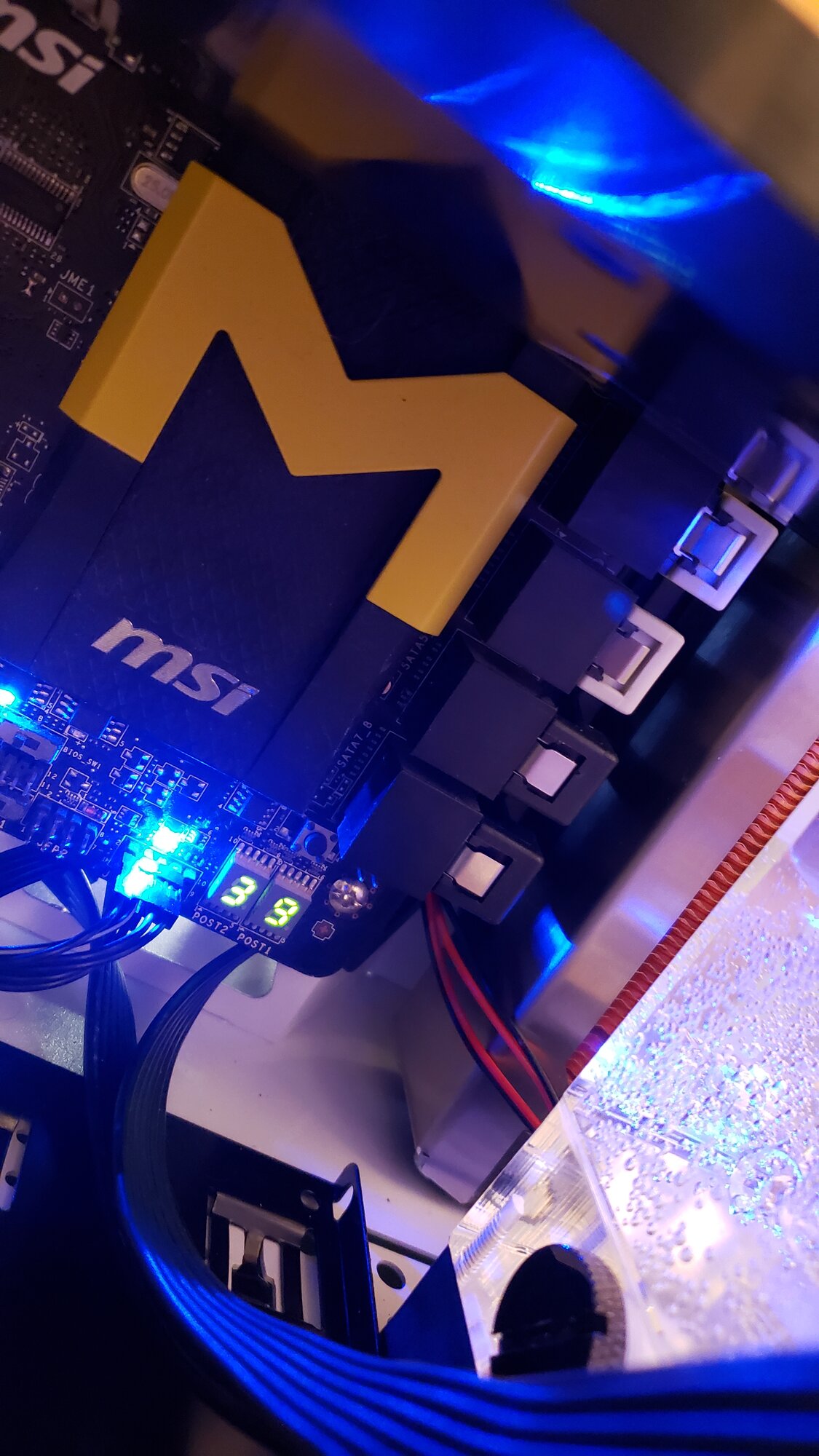 Finanly I'm an idiot and forgot to install the PCI bracket to the GPU when installing the water block. So Hyper Ghetto mod a tie wrap was used to hold the GPU up... Yeah the PCI slot is not super happy about that. Luckily for me the Pump/Reservoir combo is exactly as tall as the space from the bottom of the case to the GPU block so i used it to prop the GPU up. 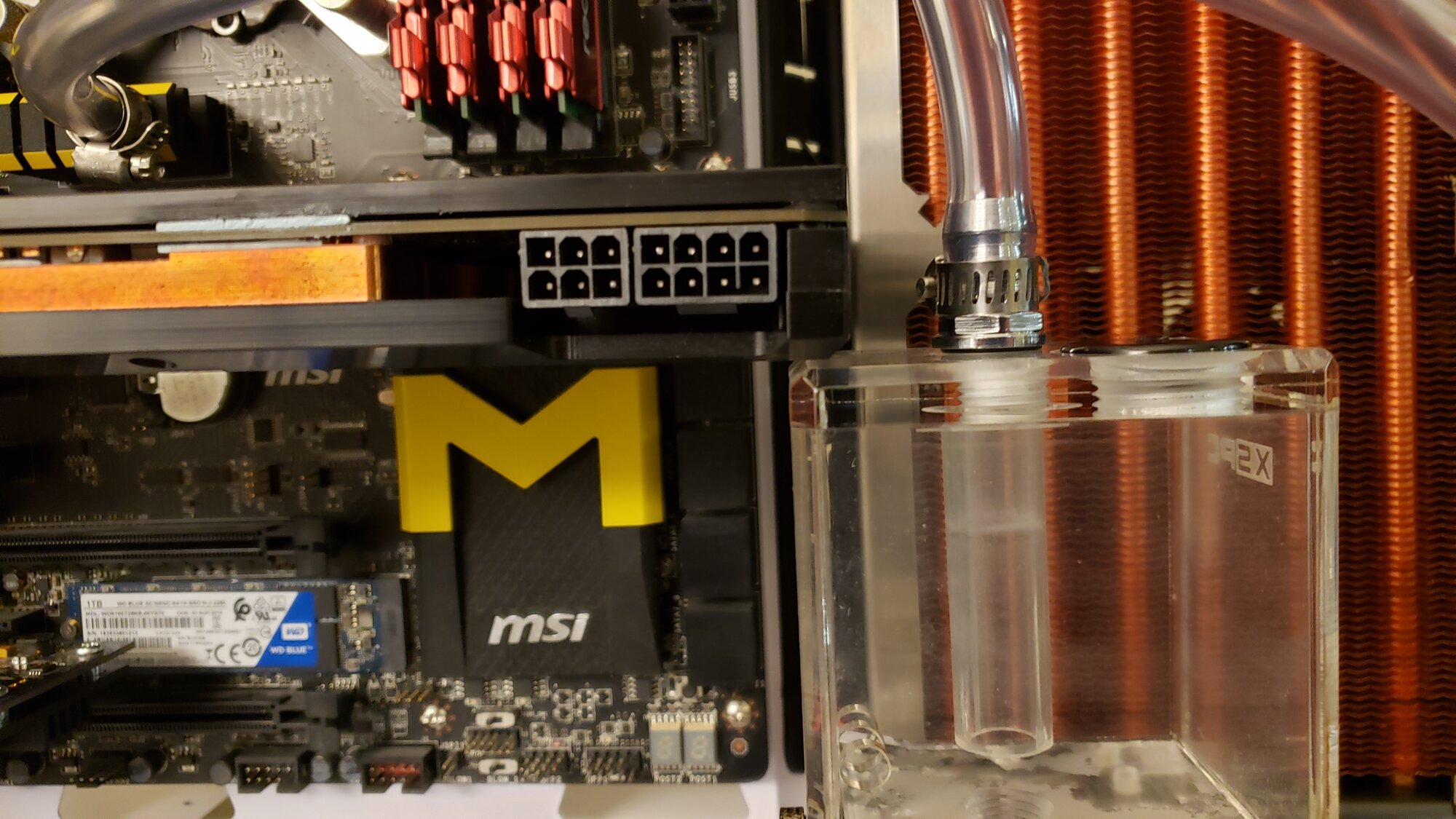 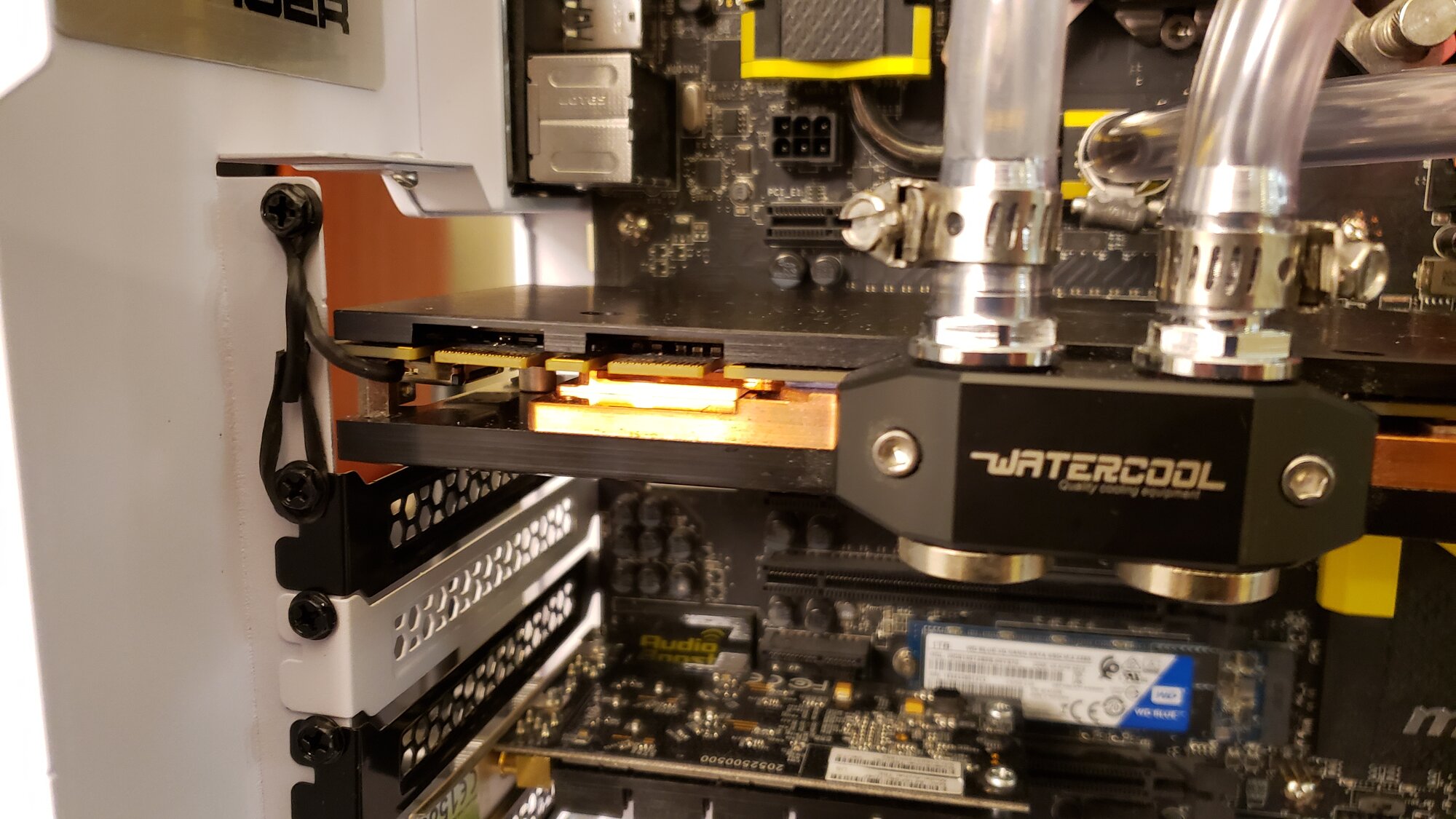 Also it seems impossible to attach the SSD/HDD backplate in the case with the rats nest of wires I have. Going to need to do some mystical cable management to get it to work. This also requires right angle SATA power cables which my PSU doesn't have standard.

It took 6 months it seems but after it is mostly finished I'm very happy with the cooling results. 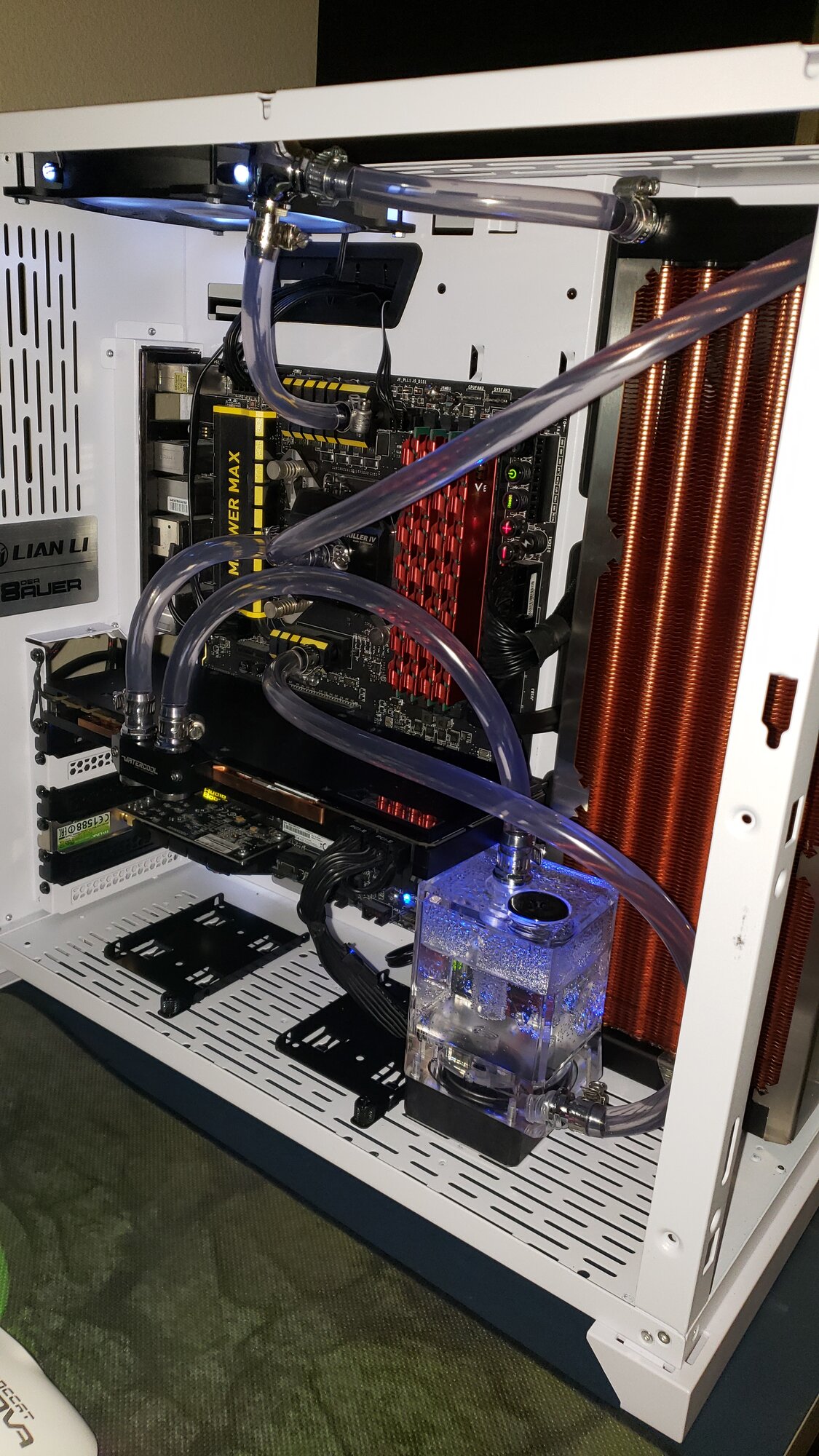 Just the one radiator. All the radiator fans are set to intake and the top fan you see there is a 140mm set to exhaust. Once I figure out the cable management in the back I'll put the panels back on and take some more pics. That odd line going to the top fan is a T-adapter in case I needed to bleed any top air bubbles and eventually use as an inverted drain port. Thanks for the kind words.
H

looks good for your first build! some advice for your next drain fill, try to push your tubing all the way down onto your barbs. there shouldnt be any danger of them slipping off or anything its just piece of mind. as for the pci slot bracket. you look to have enough slack to take the card out (youll have to hold onto it so it doesnt clank up against your mb. so a spare set of hands may be useful) and screw it back on if your careful. i cant tell you how many times ive had to pull my cards out as one unit to adjust or fix something. soft tubing is pretty forgiving. have fun!

I've never had the balls to do this myself. But, I've been around here long enough to tell ya that looks solid.

I particularly like how you used the rez as a gpu brace.... Can't say I've seen that before

My 4790 is also only semi-stable at anything much above 4.6Ghz no matter how much juice I feed it for the O/C. 5Ghz stable typically requires a delid in most cases... just not worth the hassle to me, so I just keep it at 4.6 which is plenty fast enough and rock solid.

My 4790 is also only semi-stable at anything much above 4.6Ghz no matter how much juice I feed it for the O/C. 5Ghz stable typically requires a delid in most cases... just not worth the hassle to me, so I just keep it at 4.6 which is plenty fast enough and rock solid.
Click to expand...

I hope I'm not cranking too much voltage through it but I'm sitting at 1.375 volts for 4.8-4.9. I can boot into windows at 5.1ghz but cinebench immediately crashes on running. I can run cinebench at 5.0ghz but not prime95. Going to keep exploring.

Thanks for the kind words everyone. It was a frustrating/challenging time in my life changing jobs and moving across the country, so finally having this basically complete has really improved my quality of life.
You must log in or register to reply here.
Share:
Reddit Pinterest Tumblr WhatsApp Email Share Link
Top