Does this EVGA 3080 Ti just much cooler than expected, or is there another sensor I'm not looking at?

WilyKit said:
having a hard time determining if you’re troubleshooting something or thinking aloud at this stage
Click to expand...

More or less, I'm just stating my observations and then welcoming feedback...

I didn't really make this clear, but I'm not really doing this out of any sort of necessity or stress at this point. For the price I got this card for, I can overall live with any faults it has (which in hindsight aren't anything special; it doesn't artifact or anything and it does run quite cool if I didn't mind the noise). I'm just having a bit of fun since I can't remember the last time I've tried to overclock, and, unlike CPU overclocking the only cost is my game crashing every now and then, which is a lot easier to live with than a blue screen.

TL;DR this is just for fun at this point. I'll probably just end up throwing it back to stock speeds afterwards even if I succeed in this...


mhenley said:
Mchart is right, overclocking doesn't really have the intended effect because we hit power limits or thermal limits... BUT, undervolting is the new overclocking. Lowers power and heat so that those are no longer preventing your max boost. Here's a quick guide: https://www.reddit.com/r/nvidia/comments/koub76/3_ways_to_undervolt_in_msi_afterburner_for_3080/

I have my EVGA 3080 12GB running at .912v, GPU temp 79c (Mem 84c), default fan curve, and it boost to 1980mhz steadily while playing, occasionally dipping to 1950mhz in longer sessions. My PerfCap has a lot more grey than green too. This was tested with Cyberpunk 2077 at max detail and ray tracing with DLSS set to quality.
Click to expand...

So as long as I raise the fan speed up, at 84% fan speed with base power limit, my card generally doesn't hit 70C. At 100% fan speed, my card more or less stays under 65C, though I don't know if I would call that untenable with the noise. So the cooler on this is definitely competent.

I did actually try just reducing the power limit on the card to 80%, but then its boost was extremely limited. So then I applied an overclock to get it back up, but the problem is that whenever it would spike to 2k+ Mhz on 80% power limit, it would kind of crash. I might need to watch some videos on how to properly manipulate this voltage vs frequency curve, because I did actually see it in EVGA's precision app as well. I guess I kind of need a youtube video on it, because obviously I need to prevent it from going up to 2Ghz, which is where the instability is.

One other thing I'll note is that Cyberpunk 2077 isn't necessarily a true stress test if you have DLSS on though, from my experience. I've noticed my 3080 Ti (which is a bit more power hungry than a 3080) with base power constraints and 84% fan speed will boost to 1980Mhz or higher on average when Cyberpunk has DLSS on... but if you turn it off, it can go down to 1890 even (and will also run hotter). Of course at that point the framerate is also tanking because you're not really meant to take on Cyberpunk with maxed settings without DLSS, but yeah. I didn't realize how much of a difference DLSS made in this game...
Last edited: May 10, 2022
M

I never reduced power limit, increased it actually, and the purpose of using Cyberpunk 2077 is because just standing somewhere I can maintain 100% GPU load and max out my heat, something I couldn't reliably do in 3DMark or Bright Memory Infinite Ray Tracing Benchmark because of the delays between loops and scene changes. Either way, I hope you figure out how to undervolt properly (I disabled Precision X1 because if it loads it mucks up Afterburner's settings), because this gave me the best performance on this card with the most consistent frames. 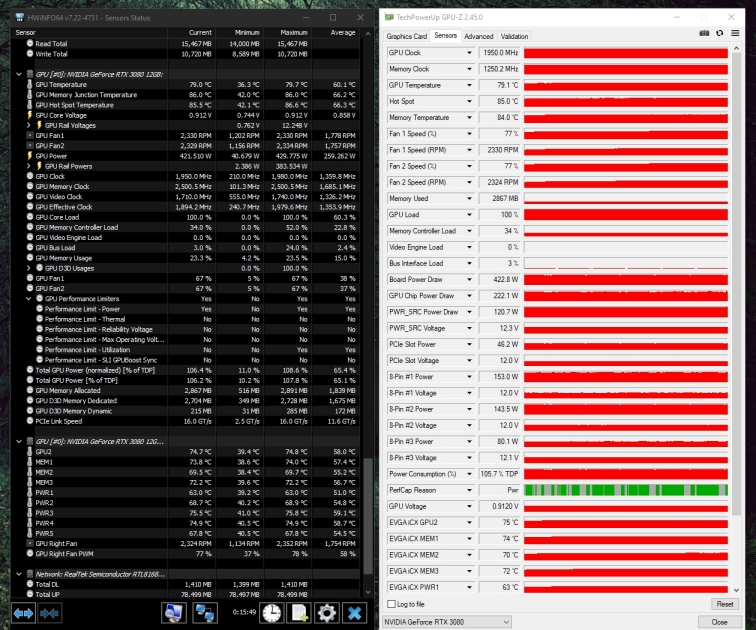