"We have just reported that MSI has updated the photos on their website for RTX 3080 series (GAMING X TRIO and VENTUS) featuring a new PCB design. It seems that ASUS has done the exact same thing. There is however a small difference between both manufacturers."
Https://videocardz.com/newz/asus-al...eforce-rtx-3080-tuf-and-rog-strix-pcb-designs

So they put out marketing materials taken of a product before they shipped and what they shipped is an upgraded(per se) version. What's the issue ? None of the retail cards shipped like that. Sleezy reporting by videocardz. 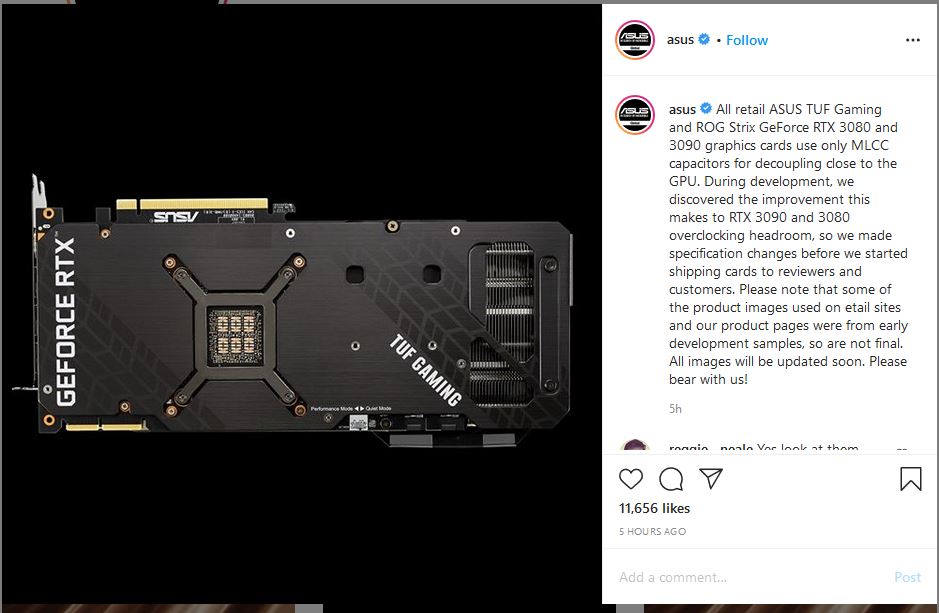 So ASUS is the only one doing all-MLCC caps so far?
N

Far as I seen on reviews just Asus. Evga doing a mix. Have to wait and see seems problem stems from many factors psu, your electrical and interference.
L

Most of the time publicity photos of products are taken before the product is finalized. There is nothing to see here. Only people that have received ASUS' TUF Gaming and STRIX cards can say for sure if ASUS' statement is accurate or not. I doubt ASUS is lying because people who received the cards would be shouting on social media as loud as they can saying that ASUS was using the inferior capacitor selection. Cards go through many revisions prior to release. I've seen hardware at various stages of development. Things like capacitor selections change during the development cycle. Even some of hardware reviewers get isn't necessarily the same version that went to retail.
X

melk said:
So ASUS is the only one doing all-MLCC caps so far?
Click to expand...