AMD is now a bigger company, by market capitalization, than Intel. It may be close, but AMD has passed Intel for the first time in the company's history with a ~$197.75 billion market cap at the close of the market on February 15 compared to Intel's $197.24 billion. AMD's sudden market cap surge comes on the back of its blockbuster $49 billion acquisition of Xilinx, the largest semiconductor acquisition in history.

AMD's acquisition of Xilinx triggered the conversion of 248.38 million Xilinx shares into 428 million new AMD shares (a process that is ongoing). Added to AMD's existing 1.2 billion shares, that brings the company's overall share count to 1.628 million, giving AMD a market cap of $197.75 billion that squeaks past Intel by a mere $51 million. (There might be some variance in calculations from the various third parties, but all should place AMD in the lead over Intel at current stock valuations.)

That marks a stark reversal for a company that was teetering on the brink of bankruptcy a mere six years ago when it first unveiled its revolutionary Zen CPU microarchitecture. Six years of relentless execution later, AMD now has an all-time high share of the CPU market, giving it the cash to ink the biggest semiconductor deal in history.
Click to expand...

My how the times have changed...
L

This is based on future growth potential, investors think AMD can grow their market share more in the near future than Intel can grow theirs so they are just expecting AMDs stock prices to go up more than Intels.

But yes it wasn’t long ago that AMD was circling the drain price wise and things certainly have changed in the past 5 years for sure.
M

It's nice to see how value of this air is larger than the value of that air.

Making news headlines out of a daily market cap? Really reaching for news, here. More interesting is that high price-earnings ratio. Let's see how they're doing at the end of the quarter. No doubt the acquisition is driving hype that will cool down. 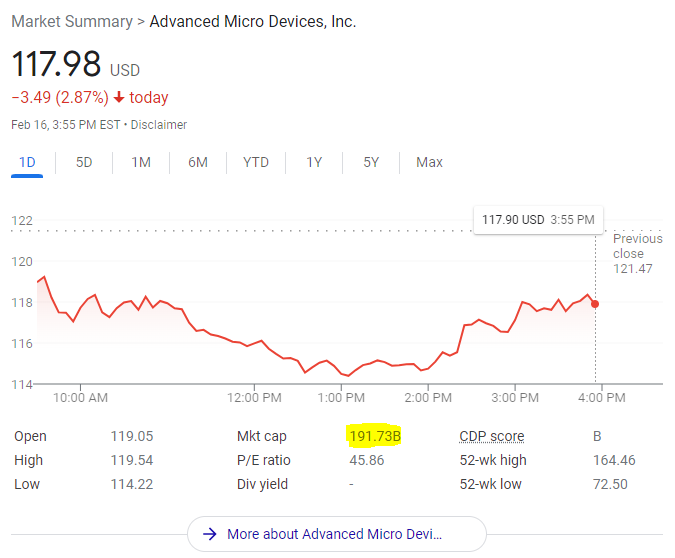 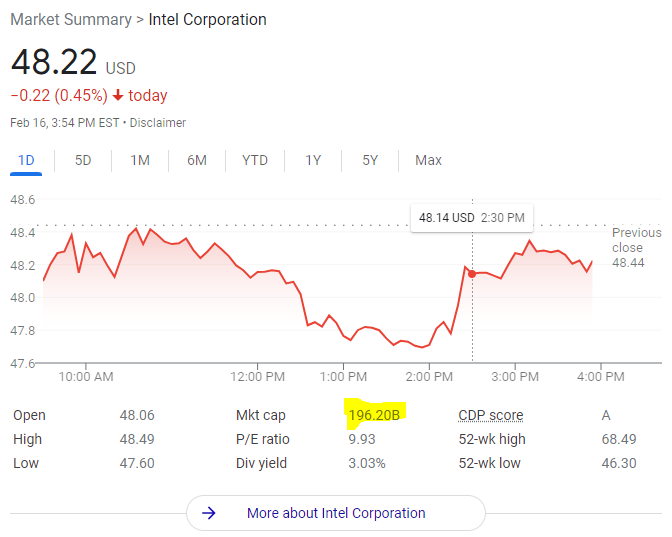 Nothing against AMD and their continuing drive of competition in the CPU market, but this seems like it's just a headline to drive clicks.
L

First time being close to Intel in market cap is more the big news/trend, no so long ago say February 2020, Intel market cap was around 280 billions, AMD was around 60 billions and now they are virtually the same 2 year's later....
Last edited: Feb 16, 2022
O

Intel's revenue is almost 5x that of AMDs with a higher profit margin so seems like AMD may be overpriced.
D

I look forward to seeing availability on them when they do launch. They are going to align with a laptop refresh cycle for me so if I can get them then it looks like the AMD 6000’s would be serious contender for me.
B

I'm definitely interested in those. I probably wouldn't get one with a gpu as a have a laptop with a 5800H+3070, but having one that is just with the iGPU in a smaller form factor, or even a mini-pc would be awesome with RDNA2.
U

Clear case of why/how the current Fed/PPP sugar rush based market is totally bonkers, AMD is higher only because it is a favorite of the WSB/FOMO crowd as much I admire their comeback story and regret selling a bunch in '14. Unfortunately this sugar rush has a lot of consequences for real folks/economy, a basic non-shitty home here now starts at $ 2 mil. And all sides of the political spectrum are guilty of feeding this...

Best of all, no Intel software/FPGA vendor lock-in licensing.
J

Intel would be worth a lot more if it divests its fabs. That said though I think the current valuation is too low. Intel will benefit from the current geopolitical trends. As long as they can execute (big question) there is a lot of upside.
U

Indeed lots.😏 Me too.

Stock market tends to be to infatuated with new companies making lots of noise. There is no reason for Tesla to be valued as high as it is, but Elon is good at marketing himself and the companies he runs to seem like a investment you don't want to miss. However when you look closer at Tesla earnings you realize that they should not be valued so much higher then other car companies. Lisa has done a excellent job of marketing AMD and taking market share away from Intel and thus why the valuation is what it is. Eventually that fades away though unless you start making monster profits. INTEL is viewed as stagnant and just trying to secure it's market share, thus a stable investment but not a great one for the value of the stock to go way up. Maybe there entry into the video card market might cause a splash with the stock market though.
C

I am not surprised, Intel fails its customers now. I had a new i7 8 core CPU fail after a few months and I contacted Intel. They made me give them everything in my system, part numbers for the ram, HD, Mobo,, then after about 60 days, they sent me a Return core.
I sent the CPU back and a week later I received a USED CPU that would not even try to turn on. After many emails I got another Return code to send it back and I did. After 2 weeks I received another i7 CPU that was also used. They refused to send me a new CPU!
I did not install the 2nd one and sent them an email saying I wanted my money back. After weeks I got a check for the chip. This took 8 months. When I went looking for a new one the price was double now. They are a nightmare to deal with.
S

undertaker2k8 said:
Clear case of why/how the current Fed/PPP sugar rush based market is totally bonkers, AMD is higher only because it is a favorite of the WSB/FOMO crowd as much I admire their comeback story and regret selling a bunch in '14. Unfortunately this sugar rush has a lot of consequences for real folks/economy, a basic non-shitty home here now starts at $ 2 mil. And all sides of the political spectrum are guilty of feeding this...
Click to expand...

AMD is higher because they have been kicking ass.
U

sleepeeg3 said:
AMD is higher because they have been kicking ass.
Click to expand...

sleepeeg3 said:
AMD is higher because they have been kicking ass.
Click to expand...

Not especially, what investors see is larger growth potential, AMD is in a position where they have successfully managed to increase their margins because their stuff is selling out completely as fast as they can make it, they also have more room to grow if AMD manages to sell an extra 20,000 units next year that would be a far larger % of growth than if Intel was able to sell an extra 20,000 units. AMD is just at the top of their game branding-wise right now and that is just a strong market position to be in, Investors also see Datacenter as a growth market, and the Xlinix merger gives them access to markets they have been a complete noncontender in until now. But this market evaluation can also be a double-edged sword, if something happens and Investors suddenly feel that AMD is overvalued or they fumble in some way those numbers could drop hard which depending on how they leverage themselves could lead to some serious hurt.

Not to go off topic but that is one hell of a stone. 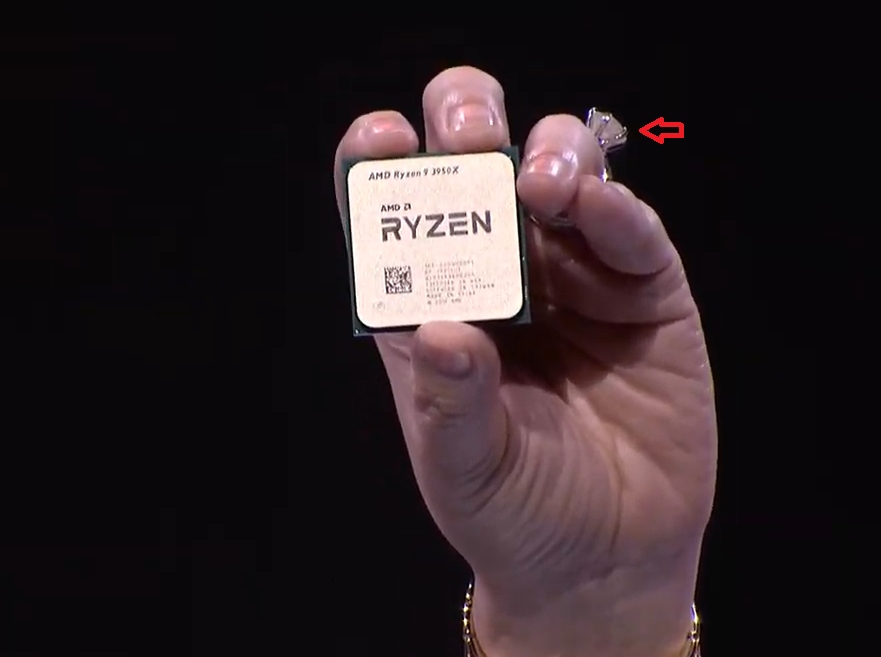 Leather jacket or bling ring. Pick your poison of non-reality living douche-bags.
How about they come out in a cheap track-suit and sell me a "F"ing GPU at a decent price ya?
S

funkydmunky said:
Leather jacket or bling ring. Pick your poison of non-reality living douche-bags.
How about they come out in a cheap track-suit and sell me a "F"ing GPU at a decent price ya?
Click to expand...

yo, easy, that looks like my mom's ring and we were low middle class.

Eh, my mom's mighta been slightly smaller, but not by much
F

SecretStash said:
yo, easy, that looks like my mom's ring and we were low middle class.

Eh, my mom's mighta been slightly smaller, but not by much
Click to expand...

Middle class my ass! Your Dad musta bought a Cubic zirconia. Your mum was scammed and you aren't her legitimat son.
T

Meeho said:
It's nice to see how value of this air is larger than the value of that air.
Click to expand...

Two weeks after this thread was posted: 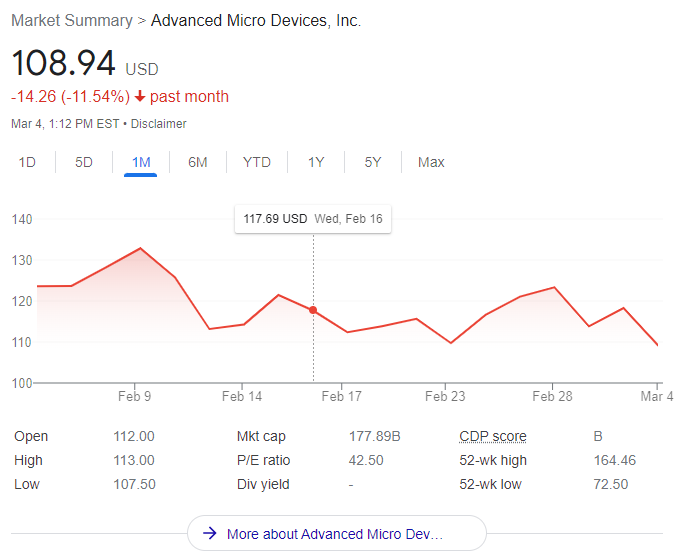 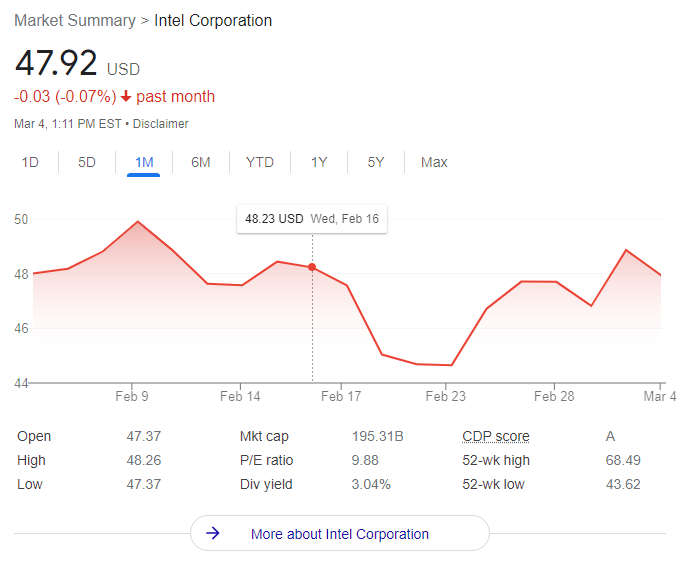 All this means is that it's time to buy more intel stock!