This post will be updated throughout the event.
Last year's thread - https://hardforum.com/threads/8th-annual-boinc-pentathlon-by-seti-germany.1929308/

All teams should sign up for the Pentathlon until 27 April 2018 using this registration form. Subsequent submissions are possible until 02 May 2018, but the project suggestions can not be taken into account.

No team will know the complete Pentathlon schedule right from the beginning! The exact time and the project for each discipline are announced 5 days (Marathon and one other discipline) or 3 days (Sprint and the two remaining disciplines) before their respective start on the main page and via Blog (Feed

The disciplines differ in runtime and possible projects. For example, the Marathon runs during the whole Pentathlon, while the Sprint lasts only three days. Hence, at any time at least one discipline will run, but often different disciplines will run simultaneously.

The BOINC Pentathlon consists of 5 disciplines:

Each team may suggest four Projects while signing up. The projects are assigned to the disciplines as follows:


Projects are not eligible if they

To keep it as transparent as possible, we will publish the suggestions of every team when announcing the final project.

This post will also be updated throughout the event.

If anyone from another team would like to participate in the Pentathlon due to their team not joining in and would like to remain anonymous, I will be providing details on how you can run your hosts under our HardOCPtest account when projects are officially announced. Please ask if you need specific instructions on how to do it as not everyone is familiar with BOINC.

If anyone would like to remain anonymous but still help our team out at Numberfields, you can do so by doing the following:

To attach a computer to your account without using the BOINC Manager. To do so, install BOINC, create a file named account_numberfields.asu.edu_NumberFields.xml in the BOINC data directory, and set its contents to:
<account>
<master_url>http://numberfields.asu.edu/NumberFields/</master_url>
<authenticator>84397_9db97db237dea1b002b53ff6161e6023</authenticator>
</account>

If anyone would like to remain anonymous but still help our team out at Universe@home, you can do so by doing the following:

To attach a computer to your account without using the BOINC Manager. To do so, install BOINC, create a file named account_universeathome.pl_universe.xml in the BOINC data directory, and set its contents to:
<account>
<master_url>https://universeathome.pl/universe/</master_url>
<authenticator>4463_daf5ad064becf7e226564cf7012c8315</authenticator>
</account>

If anyone would like to remain anonymous but still help our team out at Rosetta@home, you can do so by doing the following:

If anyone would like to remain anonymous but still help our team out at Asteroids@home, you can do so by doing the following:

If anyone would like to remain anonymous but still help our team out at PrimeGrid, you can do so by doing the following:

To use your weak account key on a given host, find or create the 'account file' for this project. This file has a name of the form account_PROJECT_URL.xml. The account file for PrimeGrid is account_www.primegrid.com.xml.

Create this file if needed. Set its contents to:

Registration is live. Please chime in on what projects you prefer the team to vote for. I will try and get a tally soon and just submit like the last couple years.

Current tally in the open forum:

Tooo much non-medic/non-bio; too much primetime
Last edited: Apr 6, 2018

DENNIS does not qualify due to it only being BETA work right now and has not had much work yet since restarting things. We also get a 4th choice if you want to tac another one on your choices.

My votes are NFS, Rosetta, RakeSearch, and Amicable Numbers.

Hey PecosRiverM, if you guys need some place to participate...come on by. Otherwise, hope to see your team at the Pentathlon

We'll see starting to get warmer here. Haven't made my mind how many systems I'll run.
C

ChelseaOilman , we need four projects to vote for. What other 2 would you like to pick?

I hope they choose rosetta as the marathon. The other three projects that I would go for are primegrid, rakesearch and seti (need to make sure everyone is using the optimized GPU application). So, one bio, two maths and one ET.
C

Gilthanis said:
ChelseaOilman , we need four projects to vote for. What other 2 would you like to pick?
Click to expand...

Anything other than Seti.
P

Votes are for Universe, NFS, RakeSearch and Seti based purely on my setup's potential for output rather than sentiment towards a particular project.

Starting to prep some quads for the show. 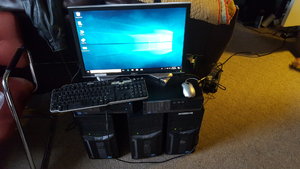 4 of the 5 are installed and going again. The 5th needs completely built as it was a castoff server recently that I haven't had time to do anything with yet. That will get rectified tomorrow.
Last edited: Apr 12, 2018

The last quad is having problems. I think there may be a bad motherboard. Testing continues...

During the Pentathlon (and before and after) you will be able to see a rolling snapshot of your credits here:
http://hard-dc.com/HardOCPTeamPerformanceTable.html

Its also linked on the homepage of hard-dc.com

Looks like I have scrounged up another quad core i5 Optiplex 390 system to set up. Home with sick kiddo today but will try and get it set up at some point this week.

I would like to get us signed up and listed within the next day or so. Does anyone else have any votes to add?

PrimeGrid, please!
I have two GPUs on that right now working [H]ard, and will continue to try to add more very soon.

Red Falcon , do you have 3 more options?

Gilthanis said:
Red Falcon , do you have 3 more options?
Click to expand...

GPUGrid is not one of the options this year.

Gilthanis said:
GPUGrid is not one of the options this year.
Click to expand...

Oh shoot, don't know how I missed that one - scratch that, University@Home.

I would like to get the voting wrapped up today and us signed up tonight. We could use a few more voters because there is a tie on the 4th project currently. If that doesn't change, I will have to make an Executive Decision.

Since no other votes came in, I registered us and voted for:
Rosetta
SETI
PrimeGrid
Universe - chosen because there was already a math project and this is CPU only making it 2 CPU choices and 2 GPU choices.

Once the page is updated, we should be added to the list of registered teams here: https://www.seti-germany.de/boinc_pentathlon/teams.php

Teams can still register and vote for 7 more days and can register up until the 2nd. We are now just under 14 days until the competition starts. Do not put off testing your rigs and learning how to tweak them. If you have any questions in advance, please ask now so that we have time to not only walk you through it but you have time to fully test your system leading up. You may even want to take this time to practice your bunkering techniques at a few projects just so that you know you have it down.
Last edited: Apr 20, 2018

Will be interesting to see how other teams are voting at the end of the event. The first marathon project will be announced sometime next weekend, Apr 28th Apr 30th, if I get this correct. Time to hone your crunching skills and polish you rigs...
Last edited: Apr 21, 2018

I am relatively new to folding.. can I download a bunch of tasks now, complete them and then upload after the starting date and have them count? How does that work?

Yes, you can. There is a limit of 6 tasks per thread. There are few ways to overcome this. See strategy forum.

PecosRiverM made a decision yet?

Anyone else in XS wanna join us?

Registered for Number Fields and ready to start crunching...

Our team is not mentioned here, but that's fine. We like to be the underdog..

Re: BOINC Pentathlon 2018
**Please forgive my attempt at translating this to English. I hope it's not too bad :/ If so, blame Google or something

It's not so easy to find a beginning every year for the Daily Bulletin on the BOINC Pentathlon. One of the first exercises is to search for the meaning of the number that defines this pentathlon. This year, ladies and gentlemen, it's nine. For the ninth time, the ultimate competition takes place in the Boinc world.

The number 9 is the smallest odd composite number and the smallest odd composite number which is not a Fermat pseudo prime number. Alright? Well, if that's too mathematical, take a look at the natural sciences. Yes, there were 9 planets and maybe there will be 10 next year; all a question of definition. In China, the 9 is assigned to the dragon. Is this perhaps an indication of what we are facing this year? But the dragon will not have it easy, because the 9-headed hydra from Greek mythology might have something against it.

As always, the challenge is the same for all teams.
The teams expect 5 disciplines: marathon, swimming, sprint, cross-country and the city run. As the marathon progresses across the distance, the teams in the other disciplines have to face tough matches for 3-7 days. New this year: the announcement period for some disciplines has been shortened. This means having to act even faster for the teams, but also more tactical opportunities for the brave. You will have to look for who wrongly distributes his resources. If you do it right, you can make legendary triumphs.

After a clear victory last year, SETI.USA faces the challenge of defending the title. The expectation is certainly not only high among the Americans. Only Planet3DNow and SETI.Germany will do anything to steal the beef from the burger. The big unknown is the power of Team China. Can the Chinese play a role in the fight for total gold? Do you already have the strength for the victory? And which other team can cause a stir in the overall ranking this year? L'Alliance Francophone, the Czech National Team, Overclock.net, BOINC@Poland or ????

The past year has already shown the trend. It's getting more and more exciting in the disciplines. More and more teams have realistic chances on precious metal. It is therefore not very brave of me to say, "Here is the mail, go out." The days are over of SUSA, SG or P3D determining everything with the medals distributed among themselves. By clever tactics, surprises are always possible, no, even guaranteed. Overclock.net's individual victory in cross country last year and Team China's silver medal in the sprint are warning examples.

Rarely has the situation been as unclear as this year. Increased crunching costs have been added to many teams. Some were just about to hoist the white flag and capitulate. Also, for organizers, it will not be as easy to find suitable projects, but real crunchers do not give up that easily. It's time to dust off the hardware, secure the sockets, stock up a large supply of caffeine and best to send the woman to the salon or the man in the pub.

The heroic battle for credits in the service of science awakens weary spirits. Anyone whose fingers do not tingle in the face of the challenge is already dead. Do you want to feel life? Let's go.
Until then, one thing is certain:
It's going to be exciting at the Boinc Pentathlon.

BTW, there are now 31 teams signing up. If we can get at least a medal finishing, that will be super-awesome. Go [H]ordes!!!

I can get in. I know last night it was off an on but it would come back up quick. Maybe tonight is having similar issues as everyone continues to hammer the servers.
E