"To much excitement and a sign of the times, the embargo has just expired on this super-exciting milestone that many of us have been hoping to see for many years. Over the past two decades NVIDIA has offered great Linux driver support with their proprietary driver stack, but with the success of AMD's open-source driver effort going on for more than a decade, many have been calling for NVIDIA to open up their drivers. Their user-space software is remaining closed-source but as of today they have formally opened up their Linux GPU kernel modules and will be maintaining it moving forward. [...] This isn't limited to just Tegra or so but spans not only their desktop graphics but is already production-ready for data center GPU usage."

What's everyone gonna bitch about with this??

What's everyone gonna bitch about with this??
Click to expand...

Why did Linus Torvalds flip off Nvidia?


Linus Torvalds, the software engineer who became the chief architect of the Linux kernel, has hit out against graphics giant Nvidia for its lack of support for the Linux platform.Jun 18, 2012

Linux wasn’t worth supporting in 2012, wasn’t until maybe 2015 when the applications for Linux got to a place where the money was there to make it worth while.
Now there’s too many custom kernels floating around too many large datacenter’s all wanting something slightly different for it to be affordable to remain closed source.

But credit where credits due, AMD’s open drivers and hardware stack are finally at a place that they can think about challenging Nvidia in the Datacenter. Their open drivers can allow for rapid tweaks that tailor performance for specific tasks on custom kernels far faster than Nvidia can currently match. To not risk those contracts Nvidia has to go open source or they have to both hire engineers and decrease their pricing, that last one doesn’t look great on a balance sheet.
This may also have something to do with Intel as well so they should get an honourable mention here, supposedly their datacenter cards are doing great and are rock solid, but they are also open, in the sense that if you buy them you can have access to the code. Doubt we’re gonna see that on GitHub any time soon though.
R

Any chance this is in relation to the blackmail breach incident?

While decent news it really doesn't mean much to us end users and/or gamers that just want out of the box graphics acceleration. It will take years to get to the current Intel/AMD out of the box experience we have now.

also benchmarks of the new OSS nvidia driver due out today: 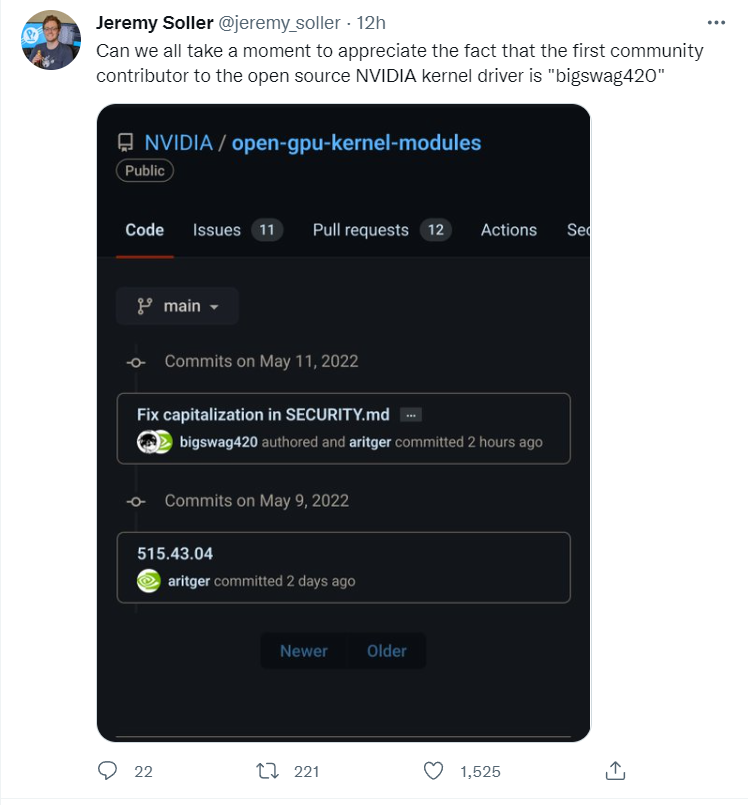 also benchmarks of the new OSS nvidia driver due out today:

It’s a fun read, based on other articles though it seems that Nvidia’s drivers are surprisingly lite on details and lots of it is function calls to firmware. The drivers don’t contain any any property stuff like CUDA and the likes.
C

rhkcommander959 said:
Any chance this is in relation to the blackmail breach incident?
Click to expand...

Probably more to do with some large super computer contract hinging on it. With Intel entering the GPU game... they don't really have any choice imo.
C

Not bad out of the gate for an alpha driver with a few things like power management still not really there.

Nvidia may not have a great reputation in Linux circles... but if they can keep their open source driver up to snuff long term, it will go a long way to repairing that.
E

I saw this mentioned the other day over LWN (not original content, but the comments were mildly insightful):
https://lwn.net/Articles/894861/#Comments