Would using the M.2 port directly under the GPU matter in terms of temperatures?

I have a Gigabyte Z490 Aorus Pro AX motherboard: https://www.gigabyte.com/Motherboard/Z490-AORUS-PRO-AX-rev-1x

Right now I have my games drive on a pair of SSDs in RAID0 (Old setup that I have been regretting doing and haven't had to money to un-do) and I would like to migrate them over to a single NVME someday, but I was wondering if which port I used would make a difference in cooling, and if it would even matter.

My board also has six SATA ports and all of them are also in use (Long story), however, two of them are being used by said SSDs that I will no longer need once I replace them with a NVME, eventually bringing me to only using a total of four of my SATA ports.

My board currently has two unused m.2 ports and both of them have a heatsink/cover from the board itself, however one of them is directly under the GPU, while the other is unobstructed but using it would disable two of my SATA ports.

While I will no longer need those ports after migrating the SSDs over to the NVME, I still would like to have them available if it's not necessary to disable them. Would there be any difference if I use the port that's directly under my GPU in terms of heating up the NVME? Or would it be better to use the other port that has nothing over it even though it will disable two of my SATA ports?

It's hard to say just how much having the SSD under the GPU will increase temperatures. It depends a lot on the design of the GPU heatsink. If it's a blower design then almost all of the heat will be pumped out of the case, but other designs might have hot air blowing right onto the SSD. If the FAN RPM of your GPU is high enough, and your SSD has a heatsink, this can actually be a good thing as it's essentially active-cooling the SSD heatsink at that point. Extra case airflow in general will also help a great deal.

Since there are so many variables, your best bet would probably be to just install it under the GPU, and then use something like CrystalDiskInfo to monitor the reported temperature for the SSD. Move it to the other slot if you see high temperatures.

GotNoRice said:
The first thing I would check is that both NVMe slots are 4x PCIe bandwidth. On some boards it's common to find NVMe ports that are only good for 2x PCIe bandwidth.
Click to expand...

According to the manual, apparently both of them are x4. At least if I read the Block Diagram correctly.


GotNoRice said:
The SSD controller on the other-hand, like any other processor, prefers lower temperatures. SSD controllers are designed to throttle if they get too hot, but this reduces performance.
Click to expand...

Yeah I know they will throttle if it gets too hot, which is why I was asking about this.


GotNoRice said:
Since there are so many variables, your best bet would probably be to just install it under the GPU, and then use something like CrystalDiskInfo to monitor the reported temperature for the SSD.
Click to expand...

I see. So I guess no real way to know due to all the variables (Plus I want to upgrade that old GPU someday) and I just have to test it.

On my setup, the NVME above the GPU is much hotter than the one below it, 58C vs 47C 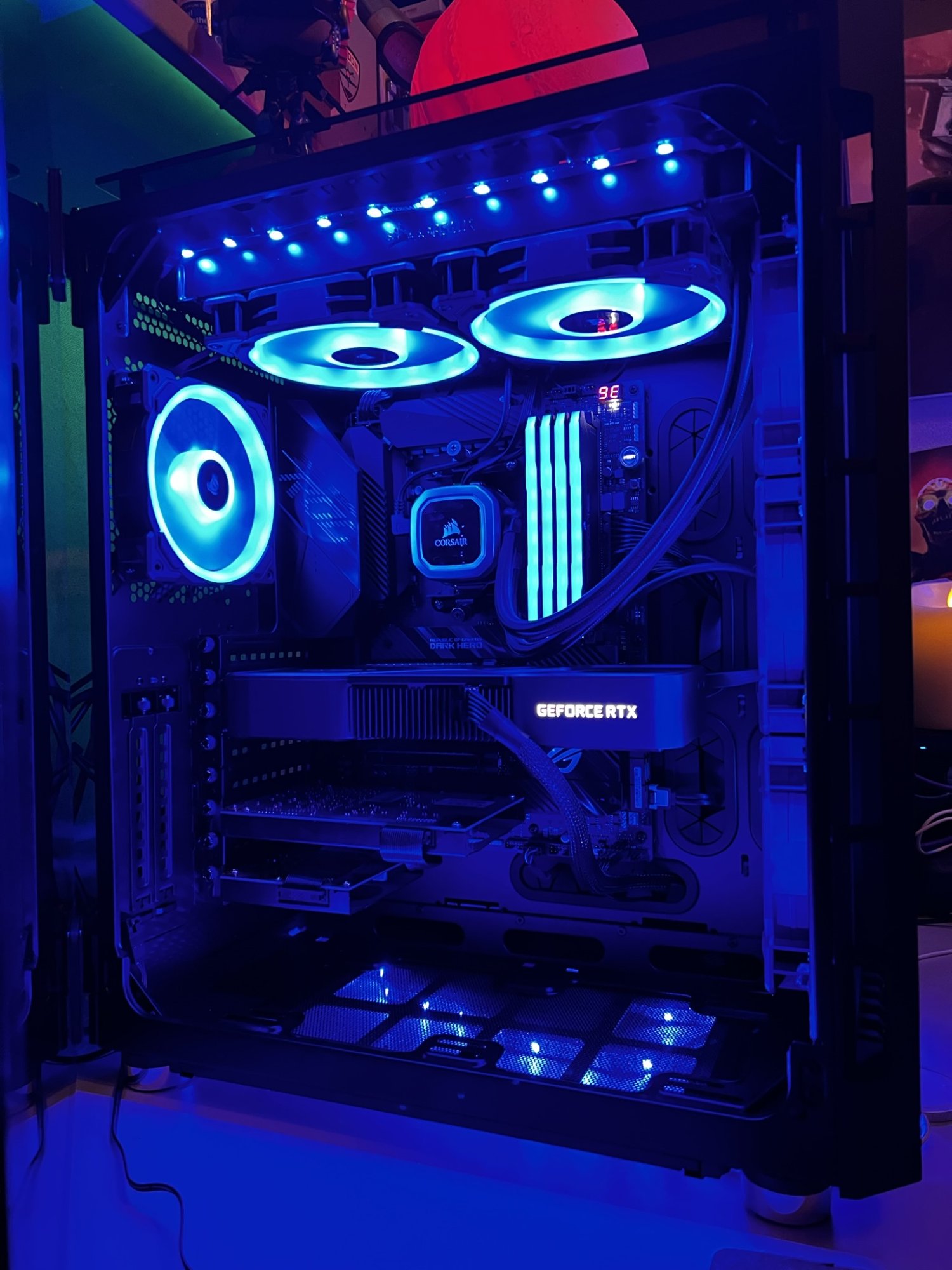 Zepher said:
On my setup, the NVME above the GPU is much hotter than the one below it, 58C vs 47C
Click to expand...

Ouch. I alraedy have a NVME that's directly above my GPU.... and basically sandwiched between my CPU cooler, GPU, and soundcard:

The one I am talking about is literally directly under my GPU, not above it.

On my board, the top NVME slot is a tad warmer than the bottom. Even tho I'm using the mobo's heatsink, the residual heat from the GPU is the cause of the warmer temp to the top NVME slot. It's just minimal, but still noticeable.

Cyber Akuma said:
Ouch. I alraedy have a NVME that's directly above my GPU.... and basically sandwiched between my CPU cooler, GPU, and soundcard:

The one I am talking about is literally directly under my GPU, not above it.
Click to expand...

Just curious, can you move the soundcard down to that lower slot?

Just curious, can you move the soundcard down to that lower slot?
Click to expand...

It would block the GPU's fans if I did. The GPU wasn't plugged in in those photos but it goes right in front of the soundcard.

All different models and controllers (see red text in image), so it's not the best anecdote, but the ADATA SSD directly under my GPU is actually the coolest by a good margin. The 970 EVO below the GPU is actually wedged between a Thunderbolt card and a 10GbE card, which is likely why it is much higher than the others.
You must log in or register to reply here.
Share:
Reddit Pinterest Tumblr WhatsApp Email Share Link
Top