Update today adds DLSS and Dualsense audio support. Also contains performance fixes including the hitching that was happening on certain frames. Patch is a hefty 11GB.

Ohhh, for those looking to single him out... I basically just start shooting everyone until I take him out...

Very strange. I didn't find it difficult to single him out- his character model carries the unique SMG on his hip, and the flavor text on "inspecting" him never changes. You are afforded many ways to lure him to do specific actions (with the exception of maybe one which I found in my playthroughs to be time dependent).

Do I hear an echo in here?

Armenius said:
Do I hear an echo in here?
Click to expand...

DLSS set to "Auto" is pretty smooth and it looks good, too. I plan to go with that from now on.
S

I've beat the single player campaign and now I'm having a blast playing as Julianna and stalking Colt's. I keep meaning to boot up other games, but I keep coming back to this game to "protect the loop".

I'm even able to enable RT sun shadows and keep things running smoothly. There's still a tiny bit of jitter to the world when moving and panning around, but I think that's just the game itself. It's 100% playable now and I don't expect a lot more updates that are focused on display/performance.
P

so players can invade other players games?...is that implemented well?
C

polonyc2 said:
so players can invade other players games?...is that implemented well?
Click to expand...

In practice, it ends up little more than being a 1v1 PVP. However, it does sprinkle a little bit of interest, by limiting your ability to invade to certain locations and times of day. And sometimes you have a simple objective to keep Colt from interacting with a satelite----not simply killing him.
And as Julianna, you have a separate progression system for weapons, abilities, and whatnot.

Its definitely a solid feature but....I can't help but feel like they could have done a teensy bit more with it.
Q

DEATHLOOP’s first major game update is now available on PlayStation 5 and PC. Game Update 1 (approximately 11GB on PC) improves several aspects of the gameplay experience, camera smoothness and NPC behaviors. It also resolves several issues that could cause the game to crash. (This update also includes all fixes found in the beta branch.)

Below are the highlights of what’s included in today’s update. We’ve been thrilled to see so many of you enjoying the game, from your gameplay videos to your fan art and your cosplay. We hope you continue to enjoy the game! 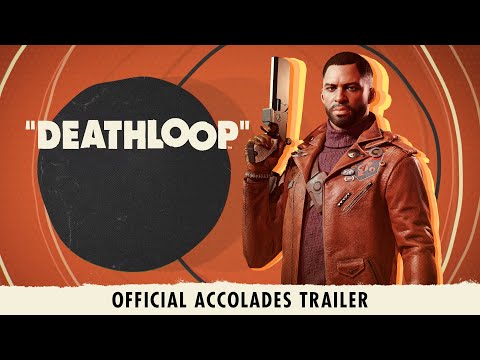 YouTube™ Video: DEATHLOOP - Official Accolades Trailer
Views: 671
Hailed as a “Game of the Year Contender,” “Masterpiece,” and “Nothing Short of Incredible,” DEATHLOOP is available now. With over 50 perfect review scores, check out what many are calling one of the...

Damn, that's what I get for being in a hurry.

Totally worth it game design is top notch.
C

MavericK said:
Already 30% off on Steam.

GMG has it for 45% off for XP members. $33.26. activates on Steam.
https://www.greenmangaming.com/games/deathloop-pc/
C

For $35 it's worth it, even if you don't finish it. It's an OK game, just don't expect Dishonored/Prey level of quality.

The update is live on Steam right now, too. Seems like a good enough time to finally dedicate myself to this game. I've dabbled a little here and there for 2 months, but other games have come out and caught my attention.
C

NPCs now react to bullets passing close by, such as headshots that miss
NPCs now react when another is assassinated close by
Click to expand...

kinda embarrassing this had to be in a patch, but it's cool they're responding to critiques.
E

Finally finished the game and towards the end I was mostly rushing through the levels. Do feel it becomes a bit too repetitive, especially once you have visited most of the areas which are locked to certain times of day or to a certain progress in the visionary leads. E.g. having to revisit an area and doing the exact same thing for the third or fourth time because you got a new lead was a bit boring/annoying. The game design itself is interesting and the shooting feels good, but the AI is still pretty bad even after the newest patch. The game does have an good concept and I found the conversations between Juliana and Colt to be quite interesting, but the other targets felt kind of generic.

Overall it is an interesting concept and fun to play in small doses, but I did get kind of bored if I had a sessions of more than 1-2 days. It is nice to have games that don't follow the same formula as everyone else, but I do feel they should have had a few more maps that you could access as the game progressed rather than just opening up small areas in the same maps. Would give it 8/10, but I do feel a lot of reviewers overrated the game.
P

sad that Arkane games for whatever reasons aren't more popular among mainstream gamers...so many positive reviews at launch as well...pretty much can't get much better reviews (a few perfect 10 scores from legit sites)
E

polonyc2 said:
sad that Arkane games for whatever reasons aren't more popular among mainstream gamers...so many positive reviews at launch as well...pretty much can't get much better reviews (a few perfect 10 scores from legit sites)
Click to expand...

It has to do with their games being a bit "special/weird" compared to the mainstream AAA games and requireing a lot more investment of time. Gaming has always been like that where simple minded fun (GTA, COD etc.) get lots of love from gamers while games that require investment into learning mechanics and how the world works get great review scores, but under perform in the sales department compared the review scores. Deus Ex is one of the greatest games of all time IMO but it had similar popularity as the Arcane games when it came to sales numbers. Immersive sims are kind of an acquired taste which limits the market quite a lot.
Q

I have zero problems recommending this at this price.

I think Deathloop checks all the right boxes, but there's something about that isn't super compelling to me. I'll start playing and then will just get bored of it. I don't really know why, but I just don't enjoy it as much as I should. I think the whole objective of having to have a perfect day run annoys me.

I've finally managed to get out of my funk with this game and put some more time into it. It's incredibly dense. Since there are only a handful of maps, nearly every since object/building has something of value. Yet the whole loop concept kinda ruins a lot of that since the game revolves around a "perfect" day run. On one hand they encourage you to keep going back to different places at different times...but you know you're going to have to start completely over (sans the gear you've infused) if you do. It's very much a damned if you do, damned if you don't kind of situation. It does a lot of things well, but the daily mechanic gets in the way.

I won the game this morning after trying to do all of the low-hanging-fruit achievements and side stuff. The structure of the game grew on me as I got further, but it really does border on tedious. I like the levels and the time they put into things, but the amount of times they force you to replay things earns an eyeroll or two. 2021 was a down year for gaming, so I'd probably still put this among my top 5 games of the year. I at least appreciate what they were going for, even if the whole roguelike concept isn't my jam.
P

The FSR 2.0 update for Deathloop will be available tomorrow.

I still haven't picked this up but it's currently available on the Epic Store for $22.49...great price...I'm tempted but with so many games in my backlog I've started to only buy games when I know I'm close to playing them...otherwise it'll just sit in my backlog while the price continues to drop
Q

polonyc2 said:
I still haven't picked this up but it's currently available on the Epic Store for $22.49...great price...I'm tempted but with so many games in my backlog I've started to only buy games when I know I'm close to playing them...otherwise it'll just sit in my backlog while the price continues to drop
Click to expand...

Honestly? I wouldn't hurry to get this.
P

Q-BZ said:
Honestly? I wouldn't hurry to get this.
Click to expand...

polonyc2 said:
I know you're a fan of Arkane...you don't think it's a good (or great) game?
Click to expand...

It's a good game. Nice prices these days, too.

I had a solid playthrough and finished it but for me, it doesn't have near the staying power of the Dishonored games or even Prey. I felt like Prey's DLC Mooncrash executed this concept better. I uninstalled it and can't see myself bothering with it again anytime soon unless they add something significant to it.
You must log in or register to reply here.
Share:
Reddit Pinterest Tumblr WhatsApp Email Share Link
Top